The Beijing Star, the largest airport in the world 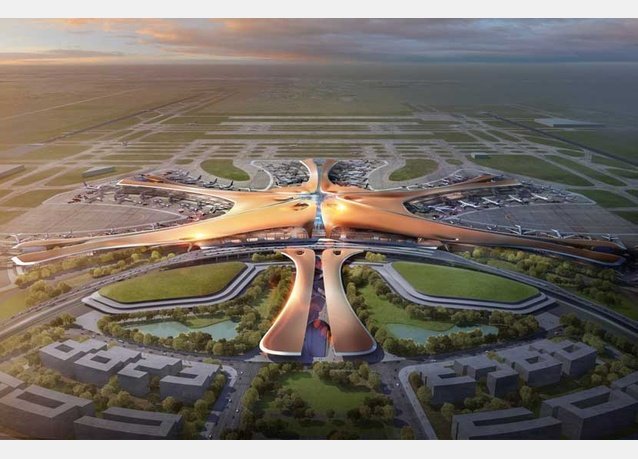 The city of Beijing has grown substantially regarding population, as a tourism center and as a business city as well. Consequently its current airport became too small to work for the city just shortly after being inaugurated. The response from the Beijing New Airport Headquarters has been just spectacular. Zaha Hadid Architects has been given the green light to build the world’s largest airport, a 5-pointed star that will start to shine in 2018.

The Dexing district in Beijing, 46 kilometers from the city center, will be the birthplace of this spectacular airport that has a construction area of ​​more than 700,000 square meters; replacing the Istanbul airport as the largest in the world. The building will consist of a central wing from which 5 arms will split. It has a modular design, which will allow it to expand in the future and even adapt its facilities to the flow of passengers in different seasons of the year. It’s expected that by 2019 it will be able to receive up to 72 thousand passengers per year and that this number can be increased up to 100 thousand passengers and 4 tons of cargo by 2025. It will feature 4 runways that will receive up to 620,000 annual flights with a distance of at least 600 square meters between them.

Beauty and intelligence in one place

Technology will be the protagonist in this architectural wonder. Domestic and international flights will be strategically organized in different wings to reduce layover time. It will have electrical transportation to move throughout its extension, in addition to solar panels for sustainability, and a water and waste recycling system. In addition, it will concentrate all transportation systems to connect with the city center, the current airport and the financial center, including the Gaotie high-speed train, which will have 80 thousand square meters.

The design of this project aims to enhance the harmony of Chinese culture, the beauty of its landscapes and the use of colors that evoke the peace of its traditions. The Beijing New Airport Headquarters started the competition for this project in 2011 and the winners, Zaha Hadid Architects and ADP Ingenierie presented a compact, spectacular, and harmonic design with a five-pointed star shape. Each tip will have a decoration oriented to different aspects of Chinese culture: porcelain, writing, tea culture, rice farms, and Chinese gardens.

The operating capacity of this airport seeks to be a catalyst for the effervescent growth of the city of Beijing and even extend this progress fever to the neighboring provinces.