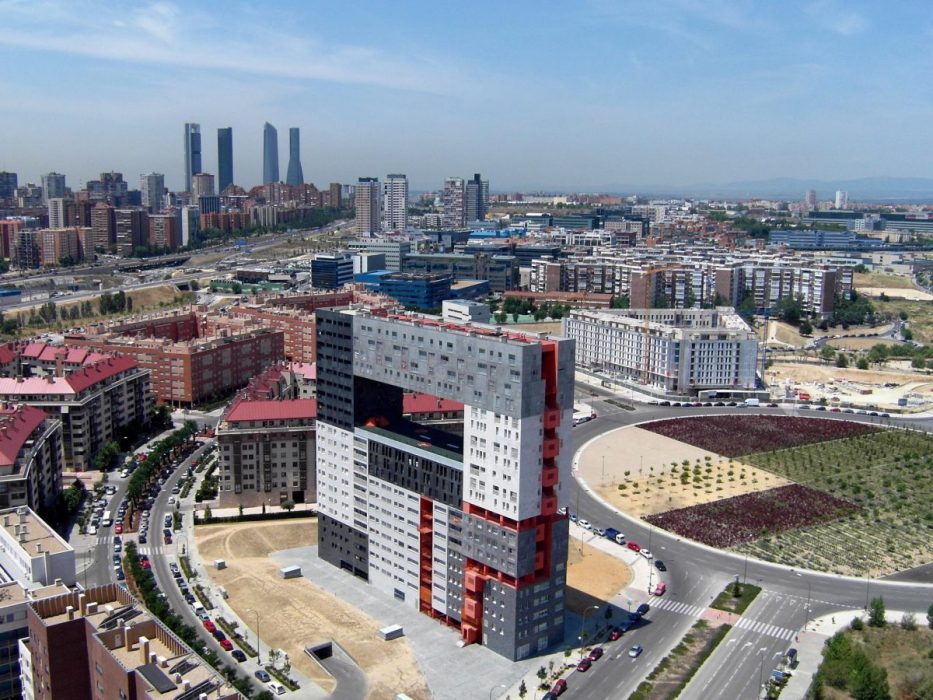 Probably, if you ask tourists, they would identify Madrid by its houses in earth colors with colonial balconies and the narrow streets full of bars and shops of the busy center, but the architecture in Madrid has evolved at the same rate of this vibrant city, thus showing today a much more modern face.

A good example of this is the residential building Mirador located in San Chinarro and developed by the EMV (Municipal Housing and Land Enterprise for its initials in Spanish) of the City Council of Madrid, which uses squares to offer a housing solution that includes a space for neighborhood coexistence and to enjoy the view of the Guadarrama Mountains from a terrace located 40 meters from the ground.

In sum, there are many works that have used geometry to make Madrid a promise of futuristic architecture. Here’s a look at some of them. 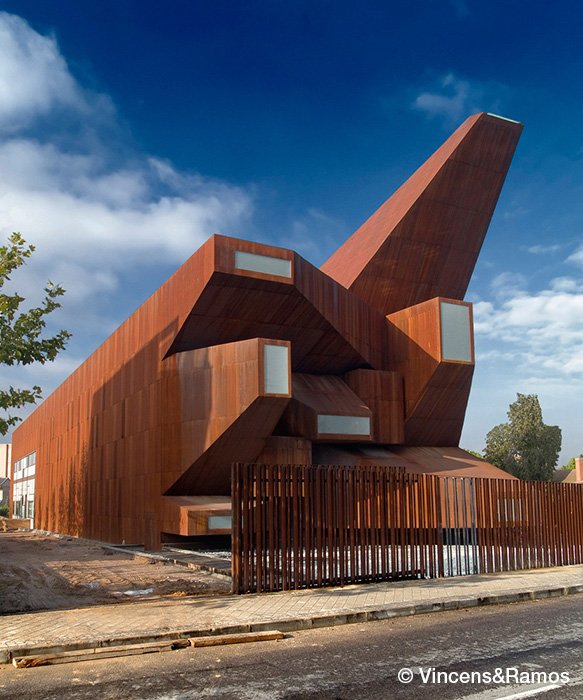 A hand pointing to the sky

This is how the architects Vincens and Ramos describe the Parochial Church of Santa Mónica in Madrid. It is a work that seeks to unify all the spaces of the parish activities in a single block: from the prayer chapel to the administrative offices and the priest’s residence.

The work developed by the studio Vincens+Ramos for the Bishopric of Alcalá de Henares is long and narrow and uses abrupt and angular cuts to achieve its characteristic geometric appearance. The complex, inaugurated in 2011, consists of two buildings joined by a steel skin that gives continuity, with symmetrical south and north facades and an integrated lighting system. 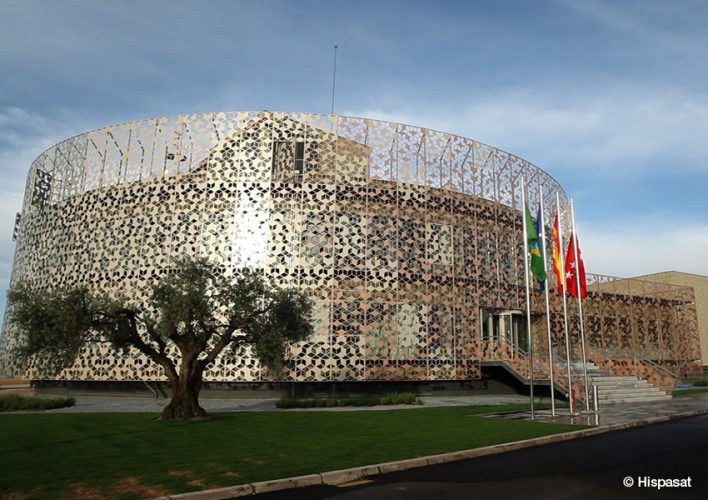 The trip to space begins on earth

The Hispasat Satellite Fleet Control Center, located on the suburbs of Madrid, presents a luminous façade full of color and precise geometric cuts that perfectly represent the technological height of the activities that take place in it. However, beyond an ultramodern facade of geometric cuts, the work developed by the studio Estudio Herreros, responds to the need of the building to have illumination and reduce its carbon footprint.

Therefore, all the natural light necessary to reduce electricity consumption to the minimum, in terms of the illumination of the interior spaces that are divided by suitable panels of beveled glass, enters through all the symmetrical cuts of its facade so that the light reaches the whole place. The work that was opened in the year 2009 is one of the most efficient buildings in the city.

Madrid’s population growth is impressive. Latin American migration and the opening of borders has brought seas of people to the city claiming housing solutions and once again, geometric designs seem to be a great option.

Next to the building of El Mirador, the Celosía is being developed, which is a housing complex that treats each house as a separate construction that then are stacked next to each other or over another like a chessboard. The result is a building that does not respond to any pattern and facilitates the creation of more integration spaces such as gardens, corridors and balconies. It was developed by Blanca Lleó Asociados for the MRDV of Madrid between 2001 and 2008.

So, the architectural spectrum of Madrid is being modernized, including works where geometry is put at the service of society, generating spaces that take advantage of light, climate or the location of buildings to provide an urban experience that is more enjoyable to the users.