A new needle in New York 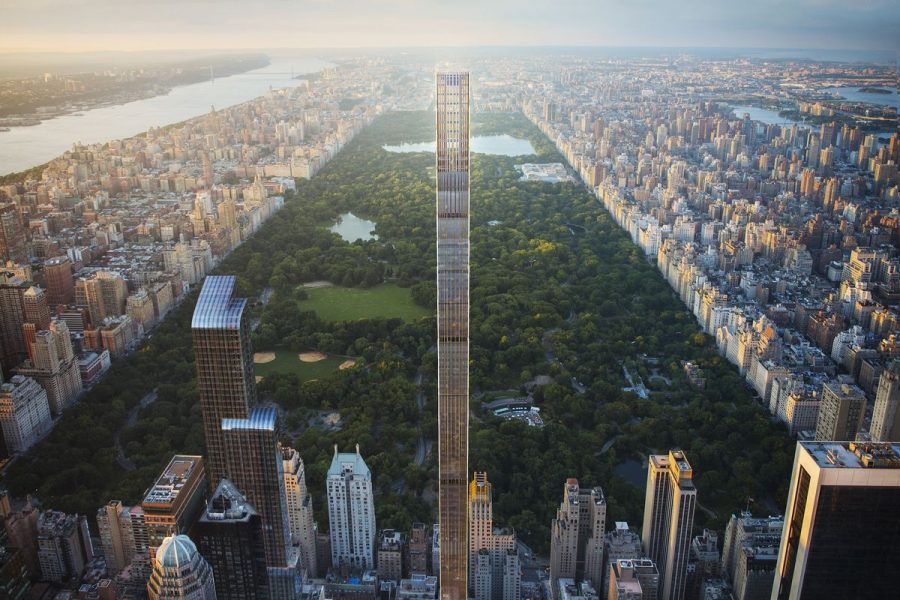 The world’s thinnest skyscraper couldn’t be in any other city. New York, the city of skyscrapers, now has a needle (Steinway Tower) that certainly won’t be difficult to find. The thinnest building in the world and the highest in the United States for now, has a very interesting story in its unique structure.

The building is an interesting example of how a work can offer multiple uses with top quality and minimal consumption of the soil, emerging as a possible trend that would be quite useful in overly populated cities. Now, let’s talk about some of the stitches revealed by the construction of this “needle” that has impressed tourists and that accompanies the most important symbols of the Big Apple.

The shiniest needle in the haystack

What’s so special about a skyscraper in the city of big buildings? The answer lies in its dimensions. The Steinway Tower (which now, for legal reasons, is known as 111 West 57th Street) is 438 meters high and until now stands as the highest tower in the country -a title that certainly won’t last long- but the most important aspect, and one that can be hardly defeated, are its scarce thirteen by eighteen feet of base, which make it earn the title of the narrowest skyscraper of the world. A concept of space use that will definitely set a trend in the coming years. In fact, at least 10 similar works are being prepared to be unveiled in 2020, including a 73-story skyscraper in downtown Brooklyn.

The building has 82 floors, 5 of them dedicated to commercial spaces, recreation and the offices of the brand Nordstrom. The remaining 77 floors occupy 60 comfortable apartments that began their pre-sales at a value of 17 million dollars and are currently sold for more than 100 million, although the structure is not ready yet, since it’s expected to be crowned by a frame that is yet to be installed.

A skyscraper with history

The 111 West 57th Street was built by the tallest crane in New York and designed by the studio SHoP Arquitects. The building was originally designed in 1925 by Warren and Wetmore and its construction began in the year 2014, using the Steinway Hall aerial rights that were acquired in 2013.

Its silhouette is staggered, which accentuates the impression of altitude and combines three materials that are rarely found together: Bronze, glass, and terracotta. Normally, skyscrapers are fully glass-coated, but in this case, the east and west facades include terracotta rows, which give an even more interesting look to the magnificent work that was inspired by the iconic constructions of New York in the Decade of 1920.

Although in plain sight it might seem fragile, the structure used 49,000 cubic yards of concrete and 100 tons of steel bars for reinforcement. It’s a master engineering work of the WSP Parsons Brinckerhoff group where technology combined with the full mastery of a brilliant team, that joined efforts to face a challenge that is not precisely narrow.

A view that isn’t narrow

What is the biggest attraction of any skyscraper? Obviously, an enviable view. Since the creators of this spectacular tower didn’t want to stay behind, they managed to achieve nothing more and nothing less than the perfect alignment of the tower with the axis of Central Park, giving to its fortunate residents the gift of an spectacular view to enjoy it at its best, including the views of the iconic park, plus the Upper East Side and the Upper West Side. As expected, the construction of this unique needle has not been a walk in the park. Lawsuits and countersuits have surrounded the entire construction process, as well as complaints about the obstruction of the landscape.

Despite all the noise and complaints that surround the growth of this incredible work, it is still a fascinating building due to its structure and history. For now, we must wait for the next projects of this style to emerge to continue surprising us by how the space and its use can be magical depending on the architect who develops the work.