The Spiral Tower, architecture inspired by the Torah scrolls 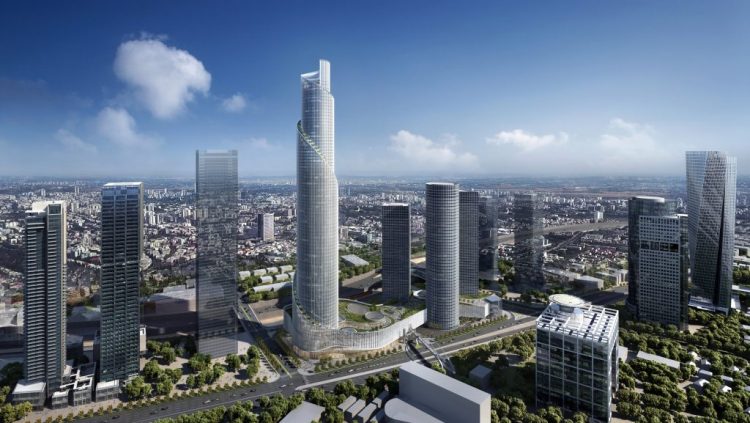 The Spiral Tower is proof that Tel Aviv opens up to the world without forgetting its sacred tradition. In fact, prestigious companies like Amazon and Google are opening their new headquarters in the capital of Israel and we lose sight of their projection into the future. So, the construction of the new skyscraper has begun in this city and the same aims at surrounding and bedazzling city residents and foreigners as well.

The Azrieli Center Complex is formed by three of the highest and most iconic buildings in Tel Aviv. A cylindrical building, a square building, and the third one with a triangular base, located in the heart of a city that doesn’t stop growing. The new building will have the shape of a snail shell. The so-called “Spiral Tower” (video) of 13,000 square meters will wrap the other towers of the complex in such a way that it seems to cover them with its structure.

The Kohn Pederson Fox Studio, with headquarters in New York, along with MosheTzur Architects Consortium, are developing the project whose foundational base extends to an excavation of 8,000 square meters. The architects were inspired by the scrolls of the Torah, an indisputable symbol of the tradition of the Jewish people and a very interesting metaphor, where this sacred roll wraps the buildings that accommodate the economic, commercial, and administrative activities of the capital of the Israeli people.

The new tower that will open in 2025 will have 91 floors, 6 of them underground for parking lots covering 45,000 square meters of the structure.

In terms of the commercial area, it will have a hotel, shopping areas, spaces for multiple uses and social exchange. Besides, it will connect with the Tel Aviv HaShalom railway station, so it’s expected to be of daily mandatory transit for at least 100,000 people.

The tower will be equipped with the highest technology to provide efficient services to its users and to have the least possible impact on the environment. The roof of the skyscraper is expected to offer a large urban garden from which the city of Jerusalem will be seen, while users will be able to enjoy a gourmet restaurant, or a private space designed for special events.

An investment that reaches the sky

The Spiral tower will not only be the tallest building in Tel Aviv, but also the most expensive one. The tower that will reach 350 meters high from the base to the last floor, without including the 6 parking lot basements, has a cost of 670 million USD.

The building that currently holds the title as the highest building in the city is the Moshe Aviv Tower, inaugurated in 2003 and popularly known as City Gate. Its height is 244 meters, with 74 floors and 6 underground levels. The cost of this investment was 170 million dollars and owes its name to the owner of the construction company that developed the work, who died two years before the unveiling.