Architect Carlos Raúl Villanueva, Venezuelan born in London, would have been 117 years this past May 30th. He is considered the father of modern architecture in Venezuela and left behind a legacy of works both irreplaceable and worthy of study in Latin America. His work is admired among architects around the world.

Although his work has many examples to show, it’s the design and construction of the Central University of Venezuela that can be recognized as an emblem of his legacy. In addition, UNESCO named the “Ciudad Universitaria”, as the campus of the university is known, Cultural Heritage of Humanity. Developed between 1944 and 1957, it brings together the highest architectural ideals with art and urban planning to present a work considered a masterpiece within the era of modern architecture. 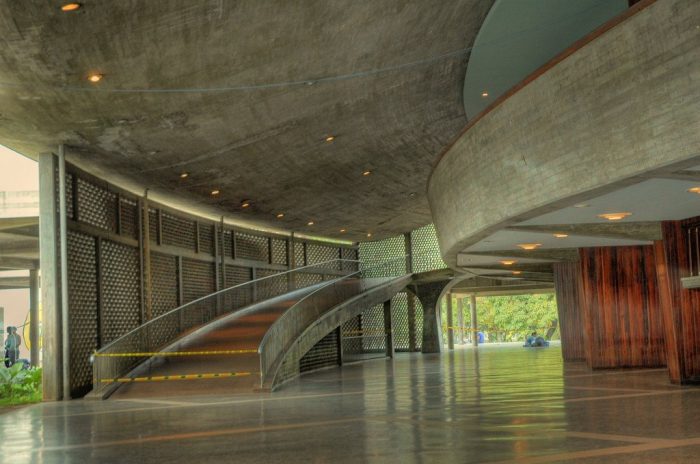 For the love of Fine Art

The MBA (Museum of Fine Arts) was inaugurated in 1938 and later renovated and expanded in 1973. For this building, Villanueva opted for a neoclassical building and later for a modern construction.

Both buildings are part of the same complex, in which the architect takes advantage of sunlight by combining internal gardens and skylights with roofs of different heights and halls of various sizes, ideal to adjust exhibitions of various formats and disciplines. In the neoclassical building, the simple lines stand out and in the modern wing the geometric forms take center stage.

Located in the city of Maracay, in Venezuela’s Aragua state, this bullring was opened to the public in 1933 and it can hold up to 7 thousand people. Villanueva was inspired by the Bullring of the Royal Maestranza of the Cavalry of Seville, building it from reinforced concrete, with semicircular arches, moorish ogives and pilasters. It is classified as the most beautiful bullring in Latin America.

Villanueva graduated from the National Superior School of Fine Arts in Paris in 1928, left a profuse legacy and was a central character of the richest period in Venezuelan and Latin American urbanism. He permeated his works of a deep social awareness, was presented in several opportunities as “the man that builds beautiful works like architects do and good ones like the engineers”, and he insisted on changing the gaze of the visitors of Venezuela’s capital.

Known by architects of his time and the present as the magician of light, his creed was the simplicity of form and materials in the conception of his work. Villanueva’s latest work, the Soto Museum in Ciudad Bolivar, has these characteristics of simplicity that point to the very enjoyment of the architecture of the place and the appreciation of the work. Carlos Raúl Villanueva passed away in Caracas on August 16th, 1975.