International Museum of the Baroque: Japanese design in the heart of Puebla 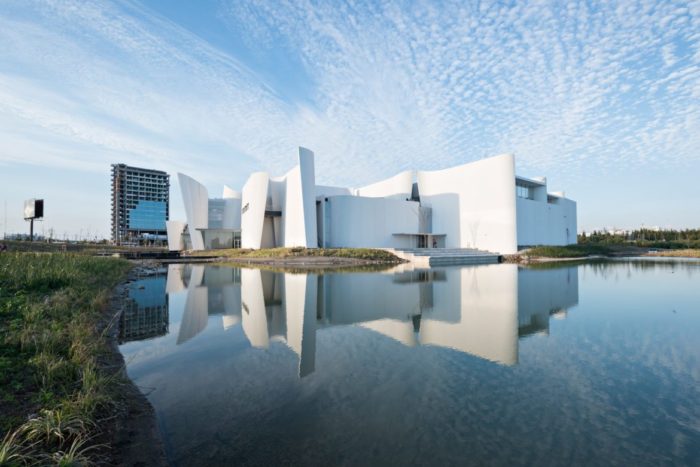 Opened in 2016, the International Museum of the Baroque is a building designed by the Japanese firm Toyo Ito & Associates, Architects. The striking 19.52-meter-high piece elevates 2 meters above the original ground, which makes it easily recognizable from the two main roads of Puebla (it is located at approximately 7 km from the city’s downtown).

The two-story building has a total surface of approximately 18,149 m²: 9,855 m² on the ground floor, 7,316 m² on the upper floor, and 978 m2 on the mezzanine. The structure is basically formed by concrete walls and slabs that have been developed in collaboration with the Mexican company DANSTEK, which specializes in concrete prefabs. 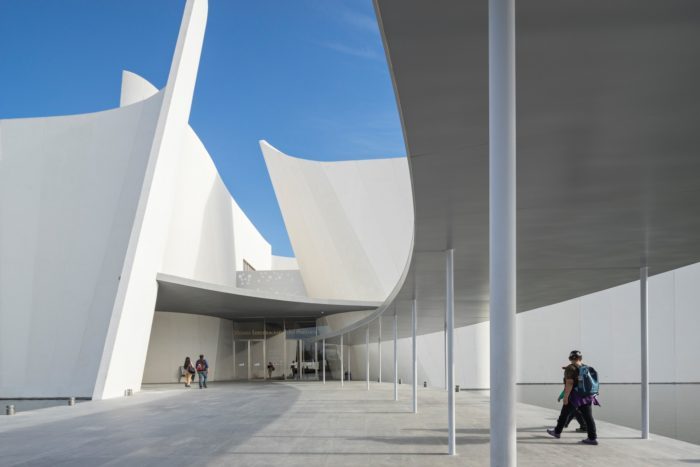 Without a doubt, a detail regarding this structure that is interesting for architects is the fact that the exposed concrete has a hammered texture that facilitates rectifying the defects on the finishes. Additionally, the walls -with a total width of 36 cm- work as structural load-bearing walls.

The IMB is constituted by three types of slabs. The first type made of a lightweight compound with a depth of 70 cm, hollow recycled polyethylene (PET) spheres, and prefab and precast slabs for an easy and quick assembly.
As part of the structural strategy, the museum constitutes a single rigid volume, which makes it a seismic resistant building. The foundation transmits vertical loads from the landfill compacted soils. 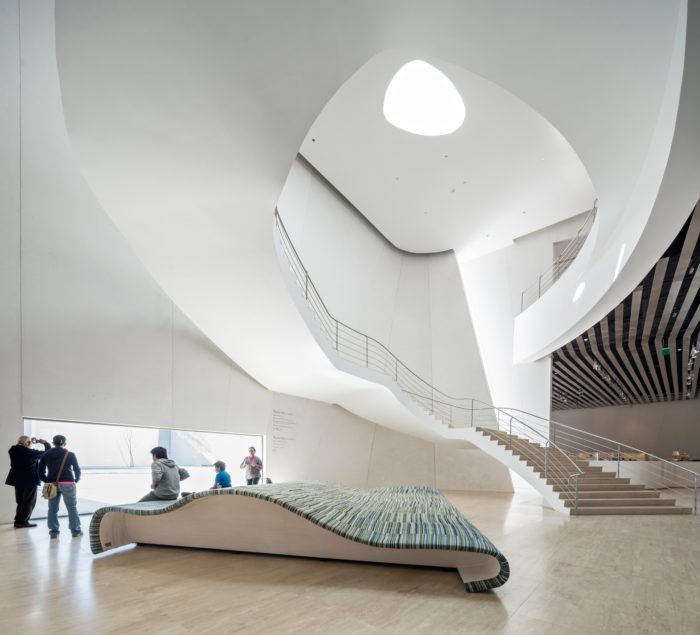 Something that was thoroughly considered was the access to the IMB. You can arrive there by private vehicle, public transportation bus or using the bike lane network that connects the museum with other parks and public spaces of the city of Puebla. The parking lot, something that always concerns visitors, has two levels on the west side and has approximately 440 parking spaces for automobiles, as well as 4 areas for buses, 42 spaces for motorcycles, and 50 for bicycles.

Also, the flow of movement inside the IMB is impeccable. The functions related to the exhibition space are distributed on the ground floor. Upon entering the building, visitors find the lobby from where they can access the exhibition halls of the museum, the auditorium and the second level.

Aside from the ticket office, the lockers, the store, and an information center, the entrance hall has two large benches designed by Japanese atelier Kazuko Fujie, which were developed in collaboration with textile artisans from Hueyapan, Puebla.

Just like any other museum, the IMB offers permanent and temporary exhibitions. The permanent exhibition contemplates a visit to 8 exhibition halls with different themes from the Baroque period to art, architecture, theater, music, literature, and even the influence of the latter in daily life.

Both the 8 halls and the exterior terrace -where you can contemplate the beautiful view of the lake and the park- are surrounded by a large interior patio of 1,800 m², a space that becomes an oasis for visitors. There you can find a large water fountain with a vortex as the central theme, which is fully coherent with the Baroque, since the movement of the water is a recurring theme in such period.

So, this beautiful museum is both a cultural lighthouse and an expression in itself of the sinuosity and detail of the style of which is custodian.