Golden City Block, will certainly change St. Petersburg, the second capital of Russia, one of the most traditional and orthodox countries in Europe. With this new project, the city will take a leap forward into modernism, but maintaining what makes it iconic: its impressive and luxurious architecture.

Golden City, the winning project of the 2016 European Property Awards in the category of “Building Homes in Russia,” won the title of “Premiere of the Year” at the Urban Awards that year as well. The objective of the project is to provide a new maritime face to the city  and therefore, is being built on Vasilyevsky Island, in an area of 450,000 square meters bordering the Gulf of Finland.

The 8-block complex that will bring together financial and residential shopping centers in the extensive construction area will showcase all the luxury of this city. All of this based on an approach of modernism and technology, topped with roofs, and golden spires that will match the famous domes of its cathedrals.

The project has been divided into blocks and is developed by Kcap Architects&Planners and Orange Architects for the development of blocks 4, 6 and 7, which are expected to be open to the public by 2024. 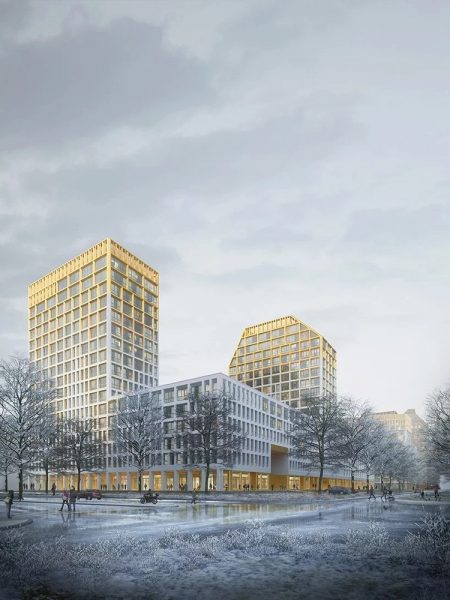 A gold medal for a golden city

In a competition organized by Glorax Development in the municipality of St. Petersburg, 12 competitors met with different designs to change the maritime face of the city. The first prize was awarded to this project that unifies tradition and an avant-garde vision, which will make Vasilyevsky shine even in the midst of the heavy snowfalls that the city normally “enjoys,” aside from vindicating the position of the island as the most important one in western Europe given its location and maritime traffic.

The 15 hectares that occupy the project that is already under development will host all kinds of activities, always aiming at maintaining excellent communication routes with the city through the main bypass-road of St. Petersburg. For example, block 6 will be residential with buildings of 7 to 18 floors with a total area of 56,000 square meters and 573 apartments between 26 and 215 square meters and 320 parking spots.

Block 4 will consist of business buildings, financial centers and service areas and will be the main front of the entire complex. In total, the whole project will be able to function as a satellite city since it will provide the public with everything they need to work, reside and get recreation without leaving the system. 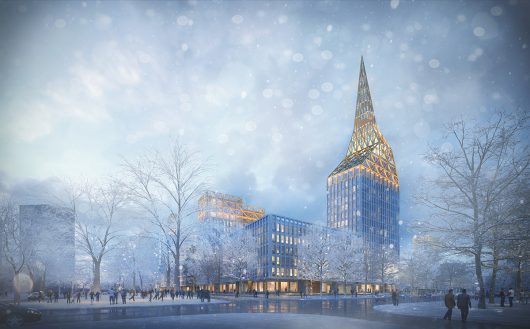 Despite all the modernism of this complex, the mark of Russian art and architecture is evident. Impressive white buildings with geometric shapes emerge, becoming golden as they approach the sky, ending in open domes or spires where you can appreciate the classic Fabergé patterns that flash in the distance.

The buildings are strategicallies arranged in the project to serve as a fortress that protects their users from the wind of the coast while they offer multiple public spaces for enjoyment and coexistence, thus humanizing the space.

The project is expected to be completed in 8 years and there is talk of an investment of 30 billion rubles (about US $475.8 billion) which makes it the most important urban project in western Europe in recent times.