Why Bosch is the King of dishwashers?

Bosch’s quality has helped the brand become the King of dishwashers since its attributes have earned it all the prestige of the most important awards in the industry. The 800 series improves all the characteristics of the previous series, thus achieving a far superior performance.

Discretion is one of Bosch’s main qualities. The dishwasher from the 800 series is the quietest machine of its kind, so it will be the leading character at any gathering due to the comfort it offers and not the noise. On the other hand, its frontal control panel remains hidden while it’s not being used, which apparently disguises its presence, making it even more discreet in terms of its appearance in the kitchen.

The configuration of the inner panel can be altered to suit the taste and needs of the user, so there will be no limitations anymore when it comes to the size of the utensils to be washed. It comes with an internal smart detergent dispenser that adjusts the dosage based on the number of elements loaded, and the third rack offers up to 30% more capacity than any other dishwasher. Besides, it has a red InfoLight that illuminates the base of the dishwasher when it’s being used as a safety measure.

But if you are concerned about the fact that cleaning the dishes doesn’t depend on you, Bosch has solved the problem: the 800 series comes with a double sprinkler arm, one on top and the other at the bottom to make sure the flow of water reaches every corner and covers all the plates correctly. 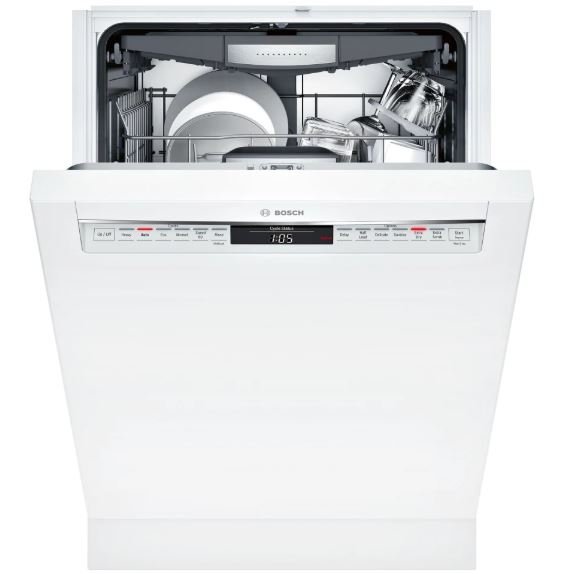 The dishwasher from Bosch is so independent that you can program its operation for up to three days. With the Delay Start function washing can be programmed at specific times and thanks to its Internet connection you can also operate it remotely through Bosch’s App.

On the other hand, you don’t necessarily have to wash the entire load. The programming system allows you to wash with half or partial load setting, adjust the temperature of the water and the amount of soap according to the level of dirt of the utensils and graduate washing time. In sum, personalize its use based on the occasion thus saving time, water, and energy.

The 800 series by Bosch comes in a wide variety of presentations and coatings that range from chromed stainless-steel to color laminates to turn the dishwasher into another decorative element in your kitchen.

With the 800 series by Bosch, you can count on the luxury of having the King of dishwashers at your exclusive service.