The horizontal skyscraper that amazes China

Raffles City Chongqing has taken China by surprise. Not only because it holds, at the moment, the record of the world’s tallest horizontal skyscraper, but because of the number of buildings it connects.

The complex located in the Yuzhong district of the Chinese city of Chongqing, exhibits what until now is an impressive construction consisting of eight towers that, by the time the project is completed, will be connected by an already existing bridge made of glass, concrete and steel that currently crosses six of the eight towers.

Tourists and residents of this thriving city can already visit the first stage of the project that has opened to the public offering a terrace from which they will enjoy the breathtaking view of the whole city.

Israeli architect Moshe Safdie designed the complex inspired by Chinese sailing vessels that in the past used to be the protagonists of the landscape of Chongqing, one of the country’s most important trade sea centers. The project won the innovation award in the category of tall buildings in China, and it’s obvious why. The eight skyscrapers occupy an area of 9.2 hectares at the tip of the Yuzhong Peninsula, where the Yangtze and Jialing rivers are located.

From the floor to the top, the larger skyscrapers have 79 floors above the ground and the entire complex sits on three basements. All this adds up to a total of 1.12 million square meters of space, which after six years of works, represents not only one of the largest projects in the country, but also one of the most expensive. 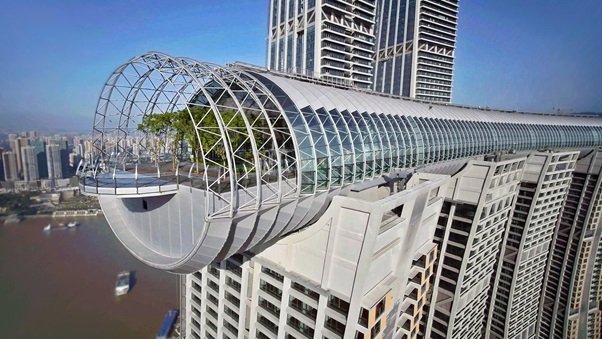 The horizontal skyscraper of Raffles City Chongqing is named The Crystal due to its structure formed by 3,000 glass panels and nearly 5,000 aluminum panels. The skyscraper was built in nine pieces: four of them at the top of the towers, three prefabricated on the ground and then elevated to be installed on the link between the towers. The remaining two are still under construction.

The construction has an anti-seismic composition as a precaution due to the high seismological frequency of the location. As if that wasn’t enough, on the inside there’s much more than a simple corridor: in its 300 meters of length, The Crystal contains two swimming pools, one of them an infinite pool surrounded by trees at one end, which is accessed through an outdoor park.

Inside there are restaurants, galleries, shops, the hotel lobby, a clubhouse for residents and access to the tallest towers through two air bridges. All this illuminated with natural lighting and surrounded by common squares with plenty of vegetation, like all the large works of the studio Safdie Architects, but this time, located at 250 meters high.

China’s Yuzhong district is expanding after being relegated for many years. Today it’s home to important constructions that answer to the quick growth of an area that now demands high-level solutions of urbanism and technology.

In the case of this impressive project, the buildings will be used as solutions not only in the business context. The complex is formed by 150,000 square meters to house offices, but will also accommodate 1,400 residences, include 235,000 square meters for premises and shopping centers, hotels, convention centers and outdoor recreation spaces.

As you can see, this isn’t only an amazing skyscraper, it’s a project that also takes your breath away due to the magnitude of its urban and architectural design.