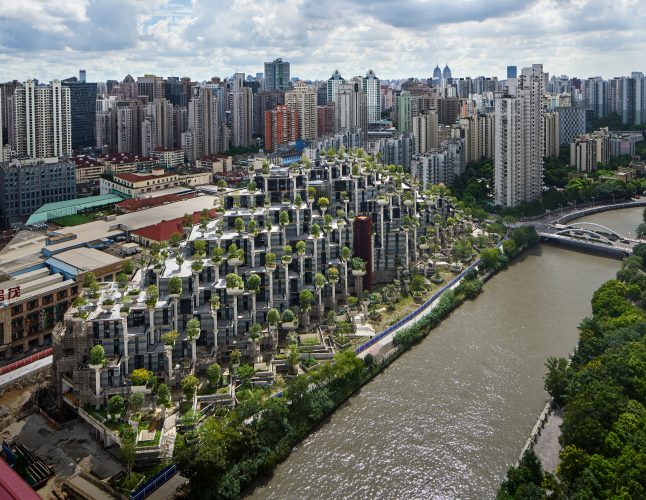 The architectural mystery of Shanghai has already been revealed: Heatherwick Studio has published photographs of the 1,000-tree development it has designed for the M50 art district of this city. The construction resembling two mountain peaks includes a mix of shops, offices, restaurants, event venues and galleries.

Although the first “mountain” of Heatherwick Studio will be completed by 2020, the images provided reveal that the project is only missing the last details. One aspect that stands out are the plant pots that come out of the base columns of the building. In this regard, Lisa Finlay, partner of this architectural studio said in an interview that they decided to express the structure and develop a strong identity for the building through these columns with pots.

“We see the pots as natural extensions of the columns. As a studio, we are truly interested in materiality and after doing a lot of research we focused on the pots as the living elements of the structure. These pots, of course, give the entire building an architectural identity, and it humanize it.”

This construction contains approximately 25,000 plants and 46 different species, including bushes, perennials and climber plants. Each pot has a unique combination of plants from Shanghai’s Chongming Island, a fertile strip of land within the Yangtze River Delta, and more than half of them are evergreen plants “to guarantee a green and lush vision -throughout the year” stated Finlay.

The structure of this building is quite interesting. It has a façade made of grey and green granite of the mountain, which is masterfully designed to form a backdrop for the plant pots. Lisa Finlay also explained that, to give greater strength to the mountain, the studio emphasized the horizontal stretch marks, reminiscent of sedimentary rocks, and incorporated texture layers formed from a single type of granite, treated with different finishes, from rough to almost polished.

However, the south facade of the mountain is different. It has a wall of art that is full of billboards and street art. Heatherwick Studio had the collaboration of   local and international graffiti artists for the creation of this fantastic contrast.

“We included graffiti artists, both local and international, and even some who used to paint nearby. They were in charge of creating original artwork for the facade. We also collaborated with these artists and others of the M50 regarding interior aspects, such as giant murals within the lift shafts.”

Once the first mountain is completed in 2020, this construction will incorporate ten levels of mixed-use facilities into the neighborhood in which it is located. The construction, which is immersed in a plan to liberate a hyper-dense and highly congested Shanghai, will be close to a new public park and walkway that the studio is developing along Suzhou Creek.

When it comes to the second mountain, Finlay revealed it will be larger and “programmatically more diverse.” “It will connect to the first mountain via a closed-link bridge, a tunnel and a slope to the ground floor.”

The second phase of the development will also involve more landscaping. In fact, it includes a 900-meter-long stretch of public space by the river and a 12,000-square-foot park that will have a jogging trail, sculpture garden and a number of outdoor event spaces.