The eyes of the world’s most famous and renowned architectural studios seem to be turning to Ecuador. The South American country has become the new Mecca for designers and architects who have begun to make their works tangible in its capital, Quito.

The capital of Ecuador, which began a process of relocation in 2013, is a compilation of unique architectural styles. In it you can see interesting examples of Latin American modernism, as well as brutalism such as the contemporary prefabrication dating back to the 1970s. However, the first structure designed by Starchitect was built only in 2017 and since then, the city has begun to exhibit here and there towers that combine the new concept of green architecture with modernism.

In an overview of the studios and names that are part of this boom we can mention the winner of the Pritzker Prize, Jean Nouvel, Moshe Safdie and Carlos Zapata who have projects currently under construction in Quito. In this sense, the Scandinavian studio BIG is not being left behind in this race, since it has already presented its second project for the capital of Ecuador:  the  EPIQ tower, a mixed-use building developed in collaboration with Uribe & Schwarzkopf of Quito, consisting of two curved blocks covered with herringbone-patterned cladding and vegetation. 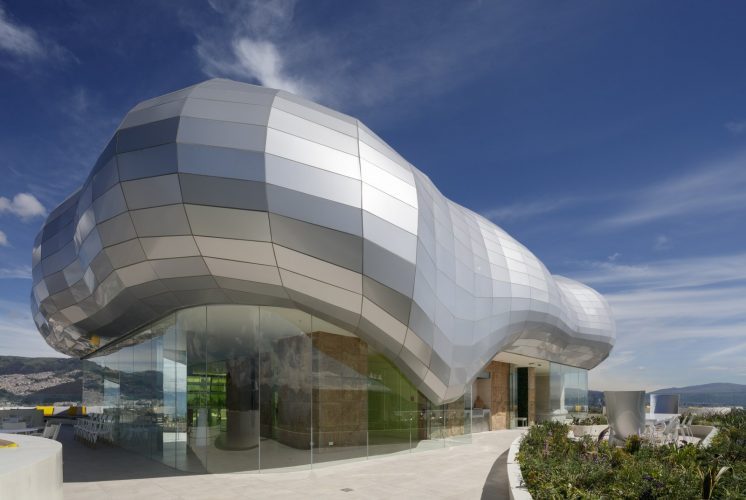 Quito, the next frontier of architecture

But this parade of international talent in Quito didn’t originate by chance. The architectural development company Uribe & Schwarzkopf, based in the Ecuadorian capital, took on  to the task of  recruiting  world-renowned architects with a simple proposal: “Why not here?”

The company formed by two generations of architects understood that the innovative vision of foreign talents  could  add  more  appeal to their projects, and of course, more charm to this thriving city. Thus, the first tower of the firm designed by foreigners emerged in a bohemian and increasingly rich neighborhood. The developers asked Arquitectónica, a Miami-based firm, to design the 22-story Yoo Quito residential building.

The studio was assisted by French designer Philippe Starck who created the interiors for this project.  Yoo Quito is therefore a unique building, whose terrace seems to be floating on a cloud of wavy aluminum panels that hides the necessary mechanical systems of the building. On the ground floor of the building there are retail shops that allow the public to engage with the building, which is highly innovative in a city where most private residences have an entrance barrier. 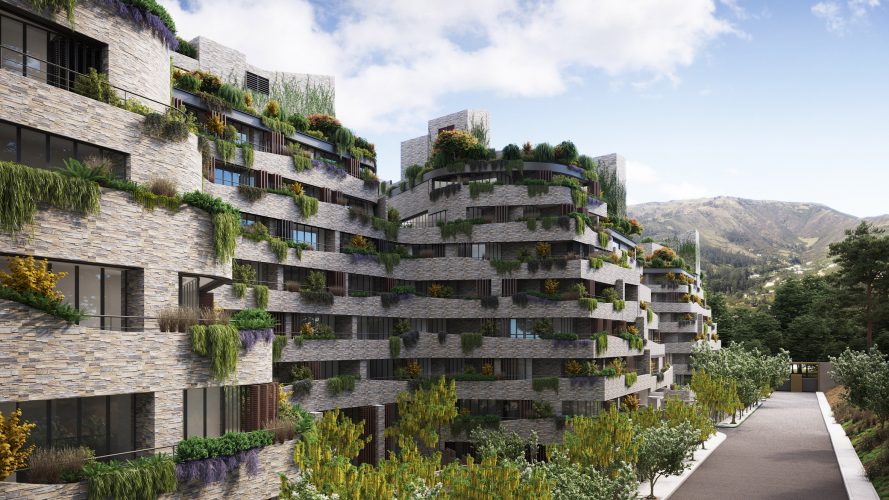 From this tower onwards, everything seems to be history. Now projects such as the “vertical city,” proposed by BIG with its 24-story EPIQ tower, will give a more cosmopolitan touch to Quito.  This construction where the residential factor is mixed with the commercial one and with offices, located on a plot in the neighborhood Parque La Carolina of the city, is based  on the Old City,  which is a UNESCO World Heritage Site.

On the other hand, Safdie Architects, the studio of Moshe Safdie proposed the construction of a 24-story  residential tower consisting of  volumes stagger in and out through balconies and cantilevers, on a small plot in the corner along Portugal Avenue in the Ecuadorian capital. The Qorner Tower, which will have a green facade and roof populated with indigenous plants, will be completed in 2020, becoming the tallest building in Quito.

And the cherry on top is none other than the proposal of the French architect Jean Nouvel: Aquarela. The 136,580-square-metre project will comprise nine residential blocks wrapped in curved stone-covered balconies. These will have  rocky gardens to give each resident a connection to the outside. And if that wasn’t enough, the residential blocks that will integrate this complex -which will be located in Cumbayá, a rural area east of the Ecuadorian capital- will have access to its own rooftop pool and several elevators so that each resident only shares access to the elevator with another tenant.

So, while Colombia enters the skyscraper race, Ecuador seems to be the ground where the most relevant talents of the moment will see their architectural proposals flourish.