With the house on their backs 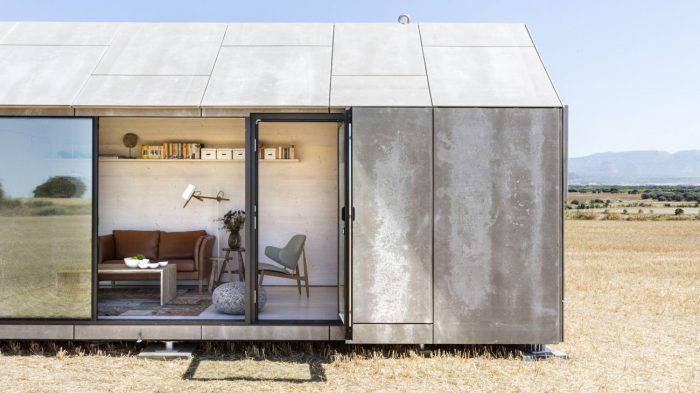 Moving is rather cumbersome. The thing is, adjusting everything you have to a different space, whether it is bigger or smaller, it’s always a headache. Just imagine the possibility of taking your home -the one that you probably bought with effort and the one that you feel so attached to- to a different scenario. That is why the new trend of “transportable houses” is for many a mixture of dream come true and the answer to all their prayers.

The idea first emerged in the 60s, thanks to an English collective of architects called Archigram. They conceived The Walking City, a set of structures and movable buildings that could be transported from one place to another according to the needs of their owners. However, it is now, in the 21st century that their idea is booming, combined with the concern for the environmental impact generated by traditional standard constructions.

The trend is focused on modular constructions, prefabricated, often with recycled materials, and incorporating self-sufficiency and flexibility notions. This allows its nomadic users to easily move the structures on trucks. Many architects have put their creativity in motion and have created different versions of this concept. We share below some of the most interesting examples of the
trend:

Folding houses. Yes. It’s not crazy at all. The viVood house is a proposal from Spanish architects and engineers that is based on a folding system that allows the deployment of the structure of the house over its own support system. That is, through prefabricated and removable pieces of wood, the house can be assembled in a few hours in any place.

The project is designed and manufactured with local materials, which means an optimal use of natural resources, and it’s an integral system where CO2 emissions are minimal. It also has an optimized packaging system that allows the transport of more parts in less space.

The maximum height is 2.50 meters, while the surface is variable and goes from 12.30 up to 32.10 square meters, which would be the largest module. In addition, these houses allow the easy incorporation of passive energy systems such as dry toilets, water cisterns, and solar panels. Important Note: Manufacturers assure that the house can be assembled and disassembled without suffering any damage, guaranteeing the reversibility of the process.

Whangapoua, the beach house. A New Zealand family, fans of the beach-life style, approached Crosson Clarke Carnachan Architects to ask the firm to build a house for the family. So far so good, the complicated thing was when they told the company they wanted the structure to be able to be moved so it would not be buried by the sand. Therefore, this architectural firm projected a nice wooden transportable house, which the owners can move at will using a tractor.

The modular architecture design of the house (40 square meters) allows it to adapt to different environments. The kitchen, the bathroom, and the living room are on the ground floor. The rooftop collects rainwater that will later be used in the house and the shutters are part of the skin façade, which also serves as an awning. The main rooms can be opened completely to the landscape, extending the interior spaces to the outside. Once completed, Whangapoua House received awards in New Zealand, Australia, Singapore, South Korea, and Great Britain. 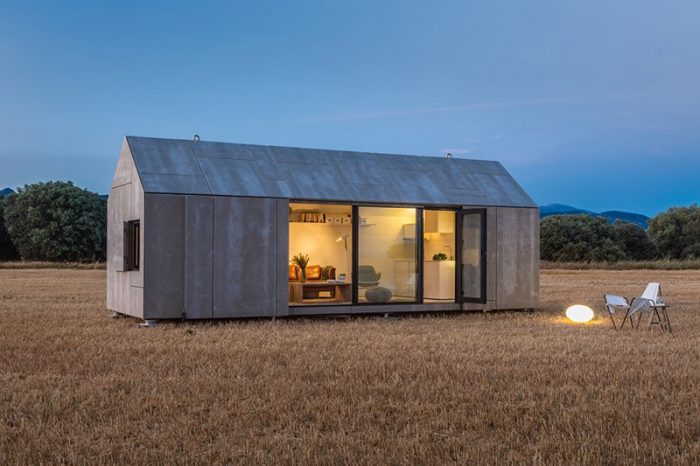 The little house on the prairie. Surely Ábaton, a firm of Spanish architects, were inspired by the Ingalls family house when they were giving shape to their ÁPH80 transportable house. The house with pitched roof and industrial look is made with panels of a waterproof material, that has insulating capacities, and which also responds to the current requirements of eco-efficiency. Designed to be inhabited by two people (27 square meters) in a comfortable way without sacrificing aesthetics, it can be transported in a truck and installed anywhere.

Although it looks like a modular architecture design, the truth is that it is integrated by three types of modules: living room-kitchen, bathroom, and bedroom; which the owner can combine according to his needs. One of the most interesting aspects of this house is the layout of its windows. In the bedroom, the frame is located just above the bed, which allows the enjoyment of the landscape. While the window in the bathroom is positioned higher to add intimacy and ventilation to this space.

Another point to highlight in this house is that it comes in contact with the ground that houses it by way of 20 cm metal pillars fixed into concrete structures that raise the construction over the ground protecting and insulating it.

Although current architecture seems to be increasingly linked to the desire of our dreams, the truth is that it has been directing them through the slope of environmental care.