Walking on the hands of a giant 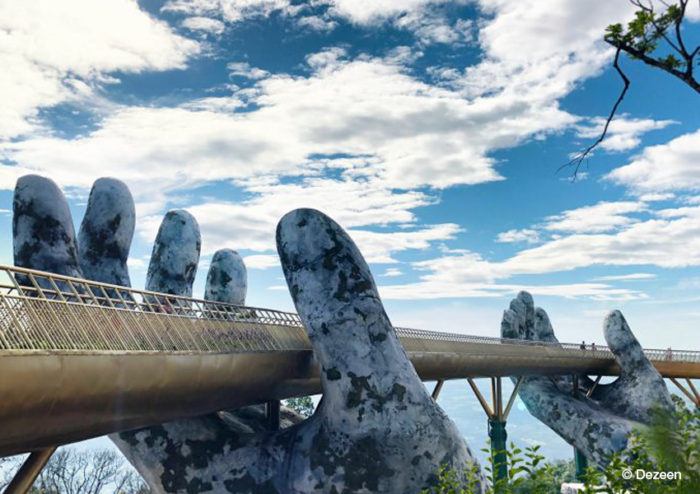 For those who have always dreamed of meeting giants, being able to be on their hands is already a reality. The Ba Ha Nill Mountain Resorts Da Nang in Vietnam built a curved bridge called the Golden Bridge, designed by the studio TA Landscape Architecture.

The architectural sample deals with an impressive 150-meter long by 5-meter-wide pedestrian bridge that rests on two stone hands that come out of the mountain, and whose edges were manufactured in golden stainless-steel.

The piece is minimally invasive toward the environment and stands out due to the realism of the stone hands that were actually made of fiberglass and covered with plaster.

The inspiration to create this wonder that floats at 1,400 meters above sea level were stories about giants and fantasy, providing the billions of visitors who have already walked through it since the month of June with a bucolic experience embellished with different lines of chrysanthemums planted along its eight sections.

The miracle of the giant

The Golden Bridge has rekindled an area that refused to die. The old city of Da Nang that used to gather up to 200 towns and was founded in 1919 by French colonists, was currently used merely as a passage between a small French town and the Fantasy Park.

Barely surrounded by a few ruins, this place was chosen for its beautiful view to build this bridge that has become a tourist phenomenon quickly reaching the first place among the most photographed bridges of the world, thus promoting the tourist retreat of Thien Thai Garden with the arrival of millions of foreigners.

The two million dollars invested as part of a master plan to attract tourists is certainly showing profits for the small Vietnamese community. 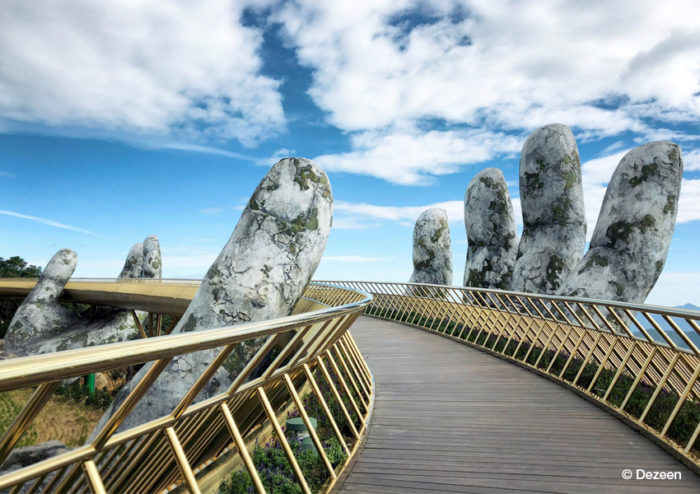 Nothing new under the sun

However, the Golden Bridge is not a work of innovation. Since ancient times, architects have worked in constructions that aspire to either please the gods/God or to get close to them.

The renowned 7 wonders of the world can attest to that. And even though there are only descriptions in ancient scriptures about the Colossus of Rhodes and the Statue of Zeus in Olympia, those were certainly the predecessors of the architectural works of this style.

The Colossus of Rhodes, for example, was a big statue made in honor of the Greek God Helios, made by the sculptor Chares de Lindos in the Island of Rhodes (Greece) in 292 B.C., which was destroyed by an earthquake in 226 B.C. According to classic writers such as Pliny the Elder, Polybius, and Strabo as well as the medieval chronicles of Constantine VII Porphyrogenitus, Michael the Syrian, and Philo; it was made with brass plates over a steel frame and measured close to 21 meters, with a white marble base of 15 meters and weighed close to 70 tons.

That makes it a little smaller than the Statue of Liberty that measures 33 meters and has a base of 48 meters, even though it was built more than 2,000 years before.

On the other hand, the Statue of Zeus in Olympia (currently Greece) was built around the year 430 B.C. in honor of “the father of the gods and men.” Supposedly, this sculpture was made of bronze and ivory by the famous sculptor Phidias. It was destroyed and lost in the Fifth Century A.C. Just as the Colossus of Rhodes, it’s only known about thanks to the descriptions of old historians and its representations in coins.

This data indicates that the Statue of Zeus occupied the totality of the width of the hall of the temple where it was located, and it measured approximately twelve meters high. Zeus was sculpted in ivory with details in solid gold and the base was made of ivory and gold as well, also the sculpture had ebony and jewels, which turned it into a masterpiece and a giant gem by itself.

In sum, modern architecture is still inspired in old ideas, but counting on the technology that makes possible the construction of more long-lasting constructions.