Rubber: the coating of modern houses

No, it’s not a joke. These days, when architecture turns to nature, ecology, and self-sustaining technologies, the incorporation of rubber into many constructions is nothing more than a logical step.

And the thing is that -although many do not remember- rubber comes from the sap of a tree, the Hevea. Its impermeability and resistance were well known by ancestral cultures that used it both to make their clothes impermeable and to create rubber pellets that, when lit on fire, were used to attack enemies.

• Its benefits come to the fore again. With sound dampening capacities and resistant to fire as well as ultraviolet radiation, builders have found in rubber a versatile material that can be molded into almost any shape, which is the reason why currently many projects use it as coating, to ensure that the building resists the passage of time. Here are three good examples:

• The CDGIA (Center for Group Dynamics and Institutional Analysis), Belgium (Dethier Architecture). This building, which is located in the Sart-Tilman Science Park in Belgium, had very limited resources for its construction, so it used low-cost industrial materials and featured a roof without eave covered in rubber sheets to minimize its maintenance. The result? A masterpiece of natural light during the day and an amazing lighthouse by night. All because of the contrast between the impenetrable roof and the façades lined with polycarbonate panels. Moreover, the industrial aesthetic of its interior -which is composed of glass divisions, polished concrete floor, and steel ceilings- proves that sometimes having less budget gives more opportunities to creativity. 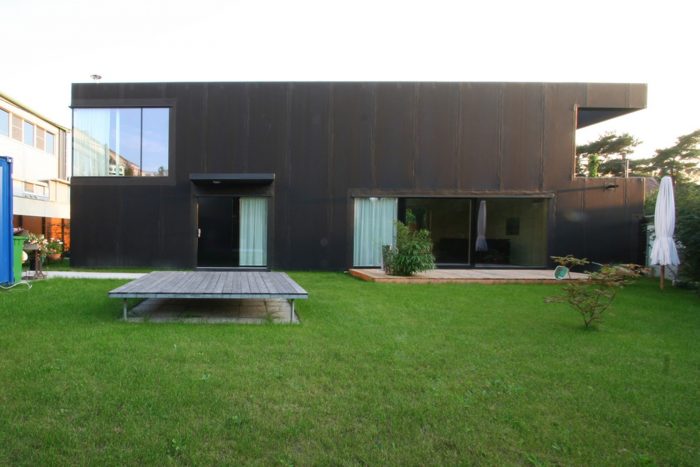 • The house in a diving suit, Austria (Pichler Architek). Located in the city of Vienna, although this house is a model of efficient energy management, what stands out is its rubber coating that, as a diver’s suit, makes it a hermetic construction. The walls underneath the rubber layer are constructed with laminated wood panels. Also, it features rock wool cloths sandwiched between the panels and the triple-glazed windows to ensure that the house is highly insulated from noise.

• Texel Holiday, the Netherlands (Benthem Crouwel Architects). Located on the island of Texel, near the coast of the Netherlands, the house is made using the “schapenboeten” of the area. Its construction is a tribute to the past of the place. It combines materials such as wood, used in walls and ceiling, and HB S-200 liquid rubber, which was used to create a waterproof finish. Layers of colored fishing nets were placed as an interesting detail, which gives the façade a playhouse appearance.

Once again, the ancestral knowledge present in nature works to benefit the creation of beauty, lending a hand to that creativity that no technology can match.