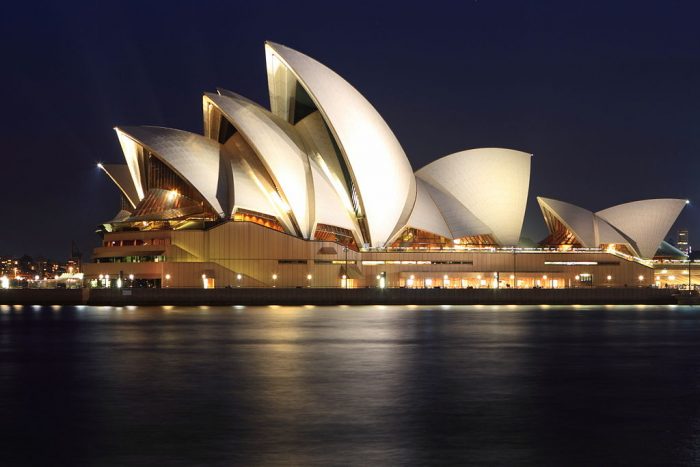 Known as the mastermind behind the creation of the Sidney Opera House, Jorn Utzon is an architect whose work will always be remembered for his ability to mix the quality of shapes with natural structures. Born in Denmark in 1918, he created a style of public buildings with monumental traits and housing structures adapted to the environment.

He studied architecture at the Copenhagen Royal Academy of Fine Arts and after World War II, he worked at the Alvar Aalto office in Helsinki. By that time his talent was already valued and he won scholarships to travel to Morocco and the U. S., and at the same time, he designed several pieces of furniture and glass objects.

During his youth he traveled to the Far East, North Africa, U.S. and Mexico, trips which provided him with a perspective and inspiration that nourished his creative imagination with natural shapes and figures. Scholars of his work affirm that it was during that period of his life when he developed the original focus which gave his work timeless relevance.

Ten years before he won the competition that led him to build the Sydney Opera House –his most renowned work-, Utzon sent a proposal to a London competition to design the Crystal Palace. Even though this project did not win, his design was labeled as “personal, sculptural, and quite unlike the mainstream of the current architectural development of the time”.

On January 29th 1957, he was announced as the winner of the “International Competition for the National Opera House in Bennelong Point, Sydney”. Nevertheless, this great honor turned out to be one of his worst nightmares. The construction posed unprecedented challenges from the engineering perspective, and as a matter of fact, it took Utzon several years to construct the building’s large independent domes, which were inspired by the sails of the ships that flood Sidney Harbor, where this magnificent building would be located.

It was thousands of problems Utzon had to faced, so he had to leave the country in 1966, leaving his work unfinished. The Opera building was completed in 1973 and it is currently one of the most renowned landmarks of the world.

The palette of projects that Utzon undertook during his life reveals a work that goes from the metaphoric Sydney Opera House to family homes with a sense of privacy, and from these, to monumental public buildings filled with ethereal and timeless shapes, all linked together by a holistic and organic architectonic creative process that is still inspiring new generations. Jorn Utzon died in 2008, not without achieving awards such as the Royal Australian Institute of Architects Gold Medal (RAIA); the Royal Institute of British Architects Gold Medal (RIBA); the Alvar Aalto Medal; the Order of Australia; the Ehrendoktorat der Universität von Sydney and the Pritzker Prize. Even though all these awards provided him with fame and recognition, he always stated that there is no better prize for an architect that an invitation to build a project.