Azulik Uh May, the return to Mother Earth 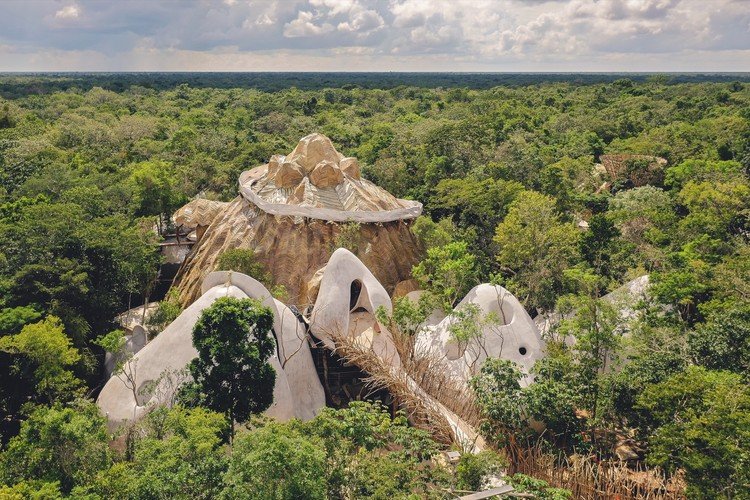 Going back to the origin, to the heart of Mother Earth is Roth’s proposal with Azulik Uh May, a holistic center in the middle of the jungle of the Yucatan Peninsula in Mexico.

Entrepreneur and architect Eduardo Neira, commonly known in the industry as Roth, is the founder of an architectural complex that “aims to reconnect individuals and tribes –both native and postmodern– with themselves, with one another, with others and with the environment.”

It has a cultural center that includes a fashion design laboratory- a multifunctional space for the arts called IK Lab. It also has a high-tech recording studio, a contemporary art gallery, residencies for artists, a multi-purpose event hall/house, facilities specially designed for physical and spiritual healing through shamanic techniques and spaces for cultural integration. But what could be envisioned as an enormous structure with different concrete buildings that leave a mark on the landscape, is quite the opposite.

What characterizes Azulik is the fact that its design leans towards the minimal invasion of the surrounding environment, thus reconnecting as well at the architectural level with the sustainable and ecological construction that protects nature and encourages a full immersion experience.

Therefore, what began as a luxury resort consisting of three thematic hotels dedicated to relaxation, wellbeing and detoxification in Tulum, in an almost virgin location in Quintana de Roo, Yucatán, has evolved with the opening of an ecological complex that is one of a kind. While visitors will benefit from it, the complex will especially benefit the Mayan community in the area, which has found an opportunity to protect its culture while it is displayed for the enjoyment of tourists.

Growing up in the jungle

The construction is inspired by the plants of the region. So, it can be described as having an anthropomorphic structure that seems to be growing in the same direction of the trees.

Vaulted concrete, polished cement and “liana”-a climbing plant typical of the region- are the main elements used in these interesting “buildings” where straight lines are practically non-existent and have minimal ecological impact. The different rooms communicate with each other through hanging bridges and winding paths of raw liana wood. They have Tiber canopy roofs where natural light penetrates as well as the shadows of millenary trees that have been respected and included in the design.

Azulik’s mission seems to exalt the indigenous culture of the place and guarantee that visitors and residents can get in touch with the wisdom and peace provided by the contact with nature.