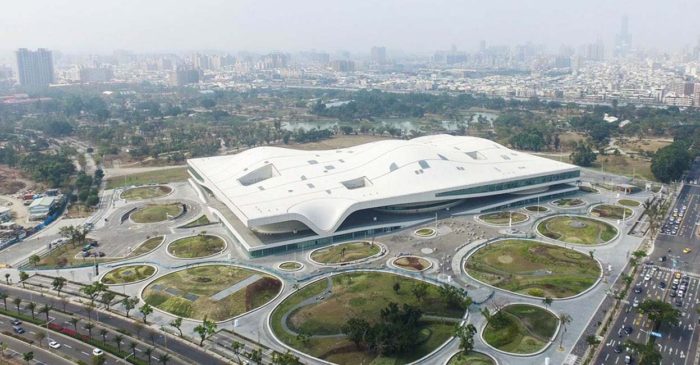 Art broke records in Taiwan. A fantastic structure that has broken different records opened its doors to the public in October. We’re talking about the National Kaohsiung Center for the Arts that, aside from being the largest in the world, also houses the largest pipe organ in Asia.

The spectacular wavy white ceiling of the Weiwuying, as the Art Center is also known, represents the world’s largest space dedicated to the arts. It’s constituted by five performance spaces distributed in 141,000 square meters of construction that are in a former military training base in a 470,000 square meters subtropical park.

The giant complex includes an opera house of 2,260 seats and a concert hall with 2,000 seats where the colossal organ that has 9,085 pipes, with an asymmetrical design that resembles bamboo plants designed by the German Orgelbau Klais can be found. In other words, one could say that this is a flexible house that can be adjusted to be a theatre room, a Chinese opera, and a dance hall with a capacity between 1,094 and 1,254 seats. As a recital hall, it offers 470 seats for solo, chamber concerts, and an open-air atrium that opens the structure into the surrounding park and can host an impressive audience of up to 20,000 people.

The most significant investment made in the cultural field of recent times happens in a city with 2.8 million inhabitants. With the intention of exposing the Taiwanese artists to the world and receiving the most important foreigners, it opened its doors to the public, after fifteen years of construction and an investment of 350 million dollars, the monumental structure whose indoor area occupies 3.3 hectares.

The Dutch architecture studio Mecanoo, led by architect Francine Houben, was in charge of projecting the work that is already a reality and that was unveiled with a succession of shows and fireworks framed in a great opening season for the enjoyment of the whole community.

For Taiwan’s president, Tsai Ing-wen, these structures represent the government’s effort to return the spaces that were under military control to the citizens.

Inspired by the sea, this fantastic wave will bring splendor and joy to the inhabitants of southern Taiwan.