The 7 wonders of modern architecture

Ancient cultures revered 7 wonders that represented the skills of men, and more specifically the abilities for construction and sculpting. These included magnificent constructions that created legends, thousands of ancient scriptures, paintings, floor plans and the remains of its structures.

Those seven wonders were the Great Pyramid of Giza, the Hanging Gardens of Babylon, the Temple of Artemis at Ephesus, the Statue of Zeus at Olympia, the Mausoleum at Halicarnassus, the Colossus of Rhodes, and the Lighthouse of Alexandria. Although many of them seem to be covered by the veil of imagination, they have certainly served as inspiration for modern architects to build wonders of their own. Here are the modern constructions that due to their beauty, execution, use of materials, and technological advances have earned this title. 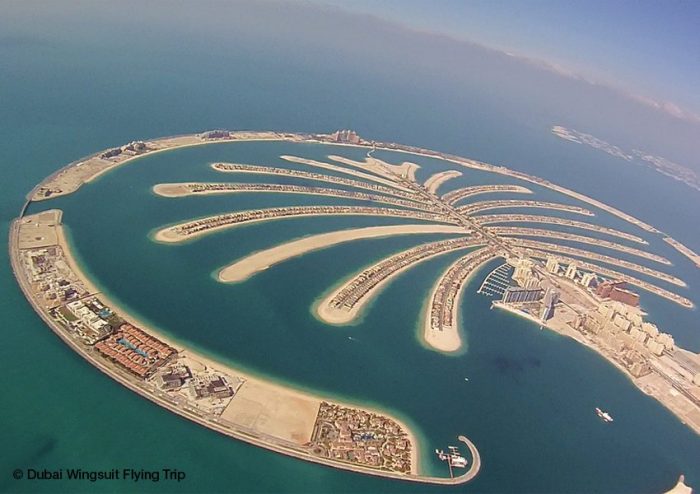 7. Palm Islands, Dubai. These are three artificial islands (Palm Jumeirah, Deira Island, and Palm Jebel Ali) shaped as date palms. The structure is formed by a trunk, a crown with branches surrounded by a crescent island as a seawall. The islands have more than 60 luxury hotels, 4 thousand residential villas, a thousand luxury homes, 5 thousand apartments, marinas, aquatic and thematic parks, restaurants, malls, sports facilities, spas, movie theaters, and diverse diving locations. In short, it is an oasis for luxury tourism. It isn’t a coincidence that one of these islands (Palm Jumeirah) offers the only 7-star hotel in the world, the Burj Al Arab hotel. 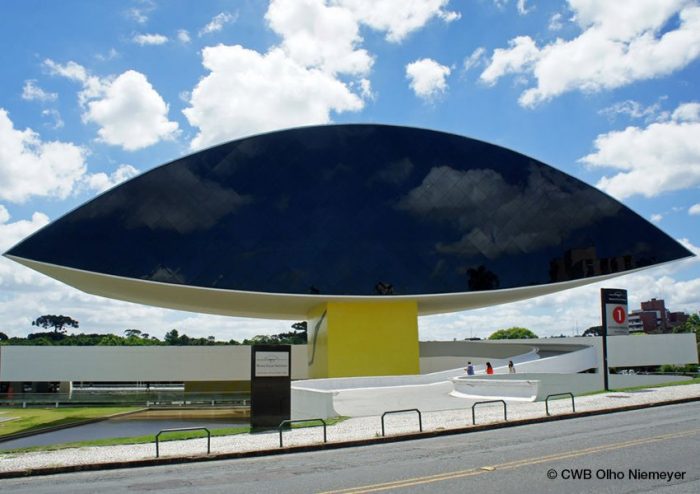 6. The Niemeyer’s Eye. Completed in 2002, when the architect was 95 years old, The Oscar Niemeyer Museum is a masterpiece. The building is full of bold curves and winding pedestrian ramps. A monument to the legacy of this Brazilian architect, a promoter and follower of the ideas of Le Corbusier. The main annex to the complex of two buildings resembles a human eye, which provides a sculptural sensation. At night, the eye illuminates on the inside and its reflection is visible from afar. For the modern architect, this museum unveiled in 2002 in the city of Curitiba, State of Paraná, Brazil is part of the pilgrimage for the most important works of the 21st century. 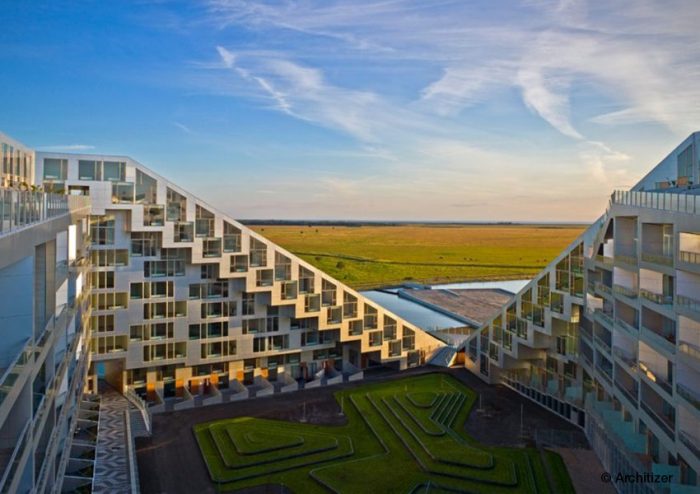 5. Denmark’s urban island. Known for the 8 House, this multi-family residential complex of the Danish study BIG (Bjarke Ingels Group) is a structure of 61 thousand meters with an 8-shaped ground floor. Located in Orestad, Copenhagen, the complex has a total of 476 homes along with commercial establishments and offices. It is built by overlapping layers included in these different typologies. On top of that, it offers 1,700 m2 of green roofs located in strategic places of this urban island. 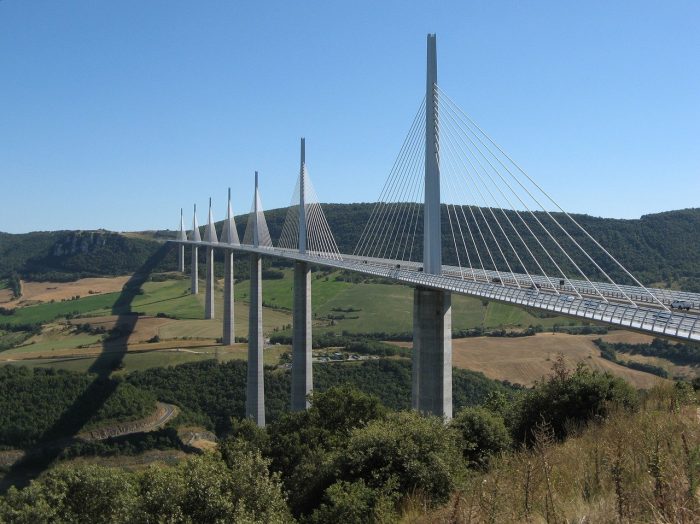 4. The bridge over the Tarn river. Located in the province of Aveyron, France, The Millau Viaduct that was unveiled in December 2004 is the tallest bridge in the world. It has an elevation of 343 meters over the Tarn river and a length of 2,46 kilometers. The structure has seven concrete columns and a width of 32 meters. Close to 3 thousand people worked on this project, which had an approximate cost of 400 million Euros. This creation of French engineer Michel Virlogeux would certainly provoke the jealousy of ancient Roman builders, who highly specialized in this type of work.

3. The Yellow River Museum. The Museum of Contemporary Art Yinchuan (MOCA), is a building designed based on the topography of the location. This work from the design study Waa (We Architect Anonymous), was built on a plot located between a desert and wetlands divided by the mythical Yellow River, home of the Chinese civilization. The museum’s façade mimics the diverse layers of sediment that support the topography of the place. Its wavy walls have 1,600 panels with a length between 8 and 40 meters. These panels are made of state-of-the-art reinforced fiberglass. 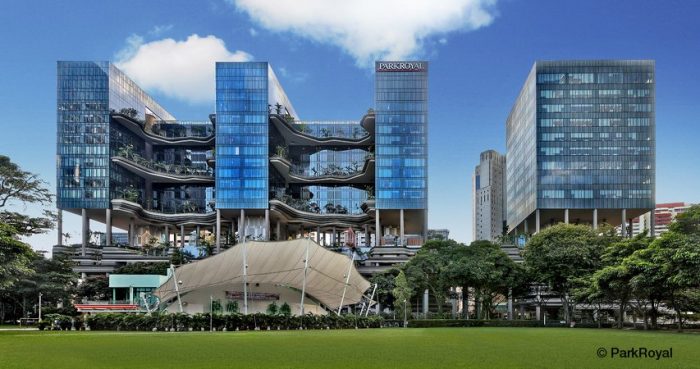 2. Singapore’s Green skyscraper. Located in the center of Singapore, the ParkRoyal hotel is a skyscraper with top-level business offices. Designed by WOHA, this is an eco-friendly hotel that has a positive impact on the environment. The blue and green glass reminds us of the waters of the nearby Singapore river, and the hotel offers a total of 15 thousand m2 of sky gardens, water mirrors, cascades, terraces, and green walls with a variety of species. These gardens are designed to be self-sufficient, so they are irrigated with rainwater. Additionally, the roof of the ParkRoyal hotel has photovoltaic cells that feed the network and lighting systems. 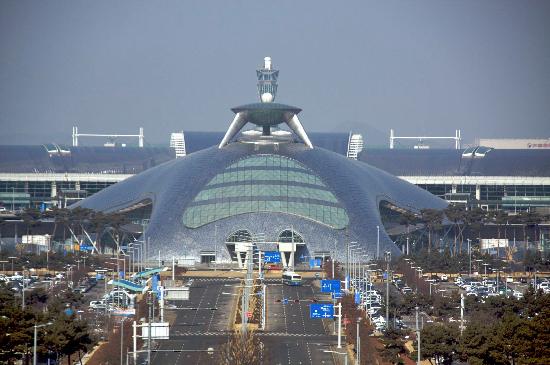 1. Incheon’s airport. The airfield of Incheon, South Korea, was classified as the best airport in the world for 7 consecutive years by the Airports Council International (ACI). The approximate cost of this terminal was 1,300 million dollars and it was designed by Curtis W. Fentress, FAIA, and RIBA from Fentress Architects. Although it has been replaced by Singapore’s airport in terms of importance and its level of passenger attention, Incheon’s airport is still considered an architectural jewel. Its roof that resembles a Korean temple, with futuristic details and diverse facilities (golf court, spa, rooftop pool, meeting rooms, ballroom, ice-skating rink, casino, interior gardens, and 90 duty-free stores) turns it into a true modern wonder.