Regenerative tourism is an innovative trend, adjusted to the new times, whose pioneer is the luxurious resort Coral Bloom currently under construction in Saudi Arabia.

A long time ago, the United Arab Emirates found in tourism an alternative source of income to oil production. So much so, that each of the 7 emirates has focused on exploiting, in a smart way, a different form of tourism.

The most recent proposal in this regard is the Red Sea Project, a regenerative tourism development that Saudi Arabia carries out with one of the masterminds of architecture:   Foster + Partners. To be inaugurated in 2022, Coral Bloom will be the part of the first stage of this extensive project that seeks to be the first global destination to adopt this proactive approach to tourism.

When ecology and luxury meet

As explained on the Red Sea Project website, this will be a development occupying 28,000 square kilometers of virgin land off the west coast of the Kingdom of Saudi Arabia, running on 100% renewable energy, featuring low-waste buildings built with sustainable materials, and leaving 75% of its vast landscape as an uninhabited paradise.

The Coral Bloom resort will be located on Shurayrah -one of 92 islands in an archipelago in Saudi Arabia- which will become the project’s central island off the emirate’s west coast. The naturally dolphin-shaped island is home to the world’s fourth largest barrier reef system, untouched corals, and a significant number of endangered species, which has prompted the project developers to take special precautions in the construction and design of the same.

Gerard Evenden, Head of Studio at Foster + Partners, explains on the Red Sea Project website the inspiration behind the distinctive designs that Coral Bloom will have: “Shurayrah has incredible fauna and flora and a special relationship to its coral reefs. This is a place where you can swim off these islands and be straight into a reef. Very unusual. So, for us the first initial reaction was we want to protect the edges…So we decided to put together a proposal that placed lightweight structures on the island. The materials we use and the low impact they have ensure that the pristine environment is protected, while the additions we make to the island serve to enhance what is already there.”

Also, Gerard Evenden points out that the idea behind the project: “it is dealt with as a single entity with 11 hotels on it. But what we wanted to do was to try to pitch the hotels so that the hotels appeal to different people at different times of their lives. You come to the island on your honeymoon, and you see the island and you experience a hotel on the island. But you come back again when you have young children, and you experience it in a different way. And so on through life. Through to old age.” 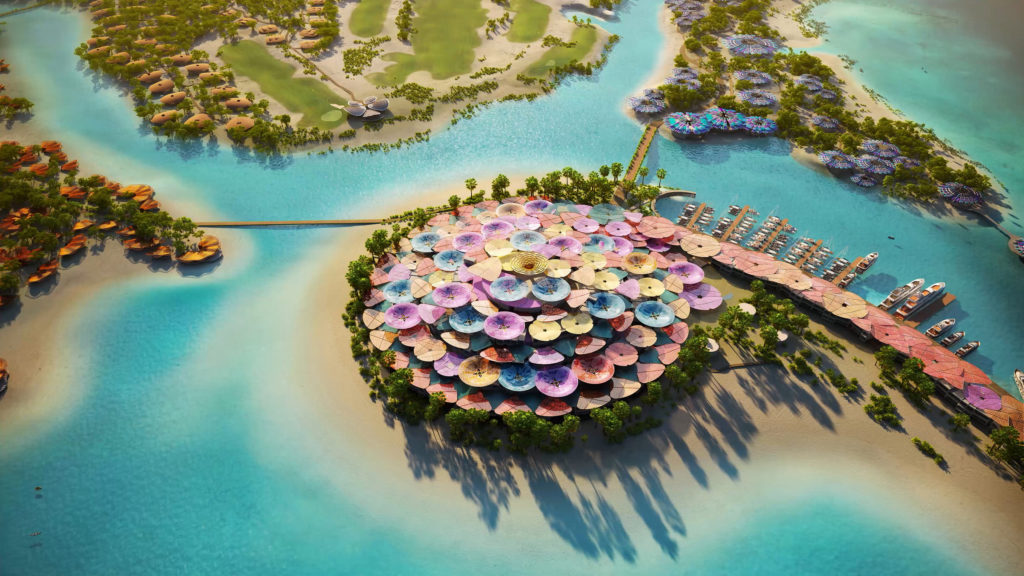 Extensive marine research was needed to locate the guest villas by the water, as the idea of both Foster + Partners and the emirate is to safeguard coral reefs and sea currents. Precisely for this reason, the resort will work with very strict rules regarding the minimization of light and acoustic pollution, the prohibition of single-use plastics and an annual number of visitors. The latter will be carefully managed to avoid excessive tourism, with the intention of offering a positive net conservation benefit of up to 30% by 2040.

The Red Sea Project is one of the most ambitious tourism developments in history, not only because it’ll be located in a paradisiacal archipelago of 90 pristine islands with beautiful coral reefs, but also because it’ll be home to canyon landscapes, dormant volcanoes, and even ancient heritage treasures.

The first phase of this complex will see five carefully developed islands and the opening of an international airport, designed by Foster + Partners. This airport will make the Red Sea Project accessible to 80 percent of the world’s population with just an eight-hour flight.

The project, which will be fully completed in 2030, will have 50 hotels and around 1,300 residences on 22 islands and 6 sites to visit within them. This will allow visitors hop from island to island, creating the perfect vacation tailored to their interests.

So, we’ll have to wait until 2022 to see what this regenerative tourism is all about and how it’ll change the way we visit the Middle East and the history of this sector.