We already have the winners of the Inspire & Design Contest 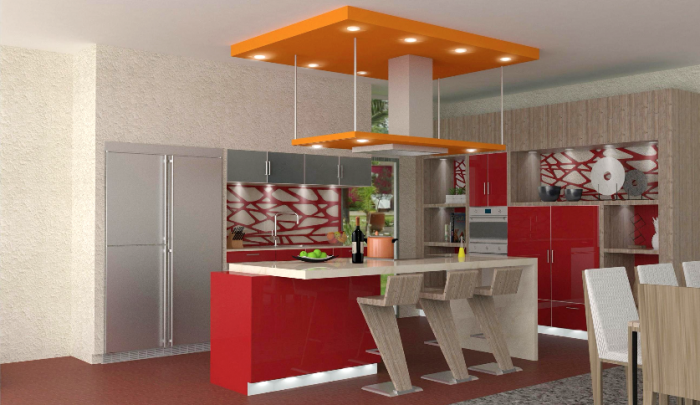 The first Inspire & Design Contest, the app from LaCuisineInternational.com, already has its first winners. Dulce Valdivieso (Honduras), William Pérez (Venezuela), and René Corredor (Colombia) are the architects who obtained the first three places in the contest that was able to gather proposals full of versatility, creativity, and style from different parts of the continent.

To choose the three winners, the jury -formed by a panel of experts and professionals in kitchen design- evaluated 4 basic criteria for the participating projects: Visual appeal and style, which had the highest weight (40%), practicality and technology (20%), workflow and details (20%), and innovation and creativity (20%) of the proposal. With that in mind, Dulce Valdivieso’s proposal reached a score of 96% obtaining the 1st place, while William Pérez had a score of 95%, and René Corredor of 91%, obtaining 2nd and 3rd place respectively.

Keys for the contest

Reaching a decision was difficult for the judges since the three proposals classified complied with all the requisites. That is, presenting a kitchen design -of any style- where the most important appliances included were Smeg or Liebherr products.

More specifically, the use of a minimum of 3 products from Smeg and 3 from Liebherr (with at least one of them being a refrigeration unit) was required. The appliances to be included in the design (cooktops, ovens, countertops) had to be chosen from a list of units provided. Additionally, each proposal had to include a description of the design in no more than 500 words, the presentation files had to be in the following formats: PDF, JPEG, TIFF and sent to contest@inspireanddesignprogram.com

The Project presented by the winner of the 1st place, architect Dulce Valdivieso, was the design of a comprehensive and modern kitchen with an open concept, a growing trend nowadays.

The combination of colors and textures in the design using wood and smooth surfaces (countertops), corrugated walls, and stainless-steel appliances created a sophistication and avant-garde style that convinced the jury.

In her design, Valdivieso included 3 Liebherr products: 1 built-in refrigeration unit, 1 wine cabinet and 1 undercounter beverage centre. From Smeg she included 1 electric hob, 1 electric oven, 1 dishwasher, 1 hood, and 1 microwave oven. All these details shaped the warm style presented in her project, with elements of technology that fit perfectly into the demands of modern life.

Without a doubt, the kitchen designed by architect William Pérez is an example of sophistication and modernism. The project created for a kitchen in a 450 m2 apartment is also an open concept, which in his opinion allows users to be connected to the whole house.

An island that shows the way to the breakfast area, is the center of the concept. There, a gas and induction Teppanyaki hob from the Classica line by Smeg stand out. Over the same are two tubular hoods from Bosch to provide the minimalist cutting-edge touch to the project.

Finally, Pérez connects this kitchen incorporating a wall with a tubular stainless-steel structure, which holds three Smeg appliances: A built-in coffee machine, an electric oven, and a microwave oven. Complying with all the requirements of the contest, the design includes also a side-by-side (48”) refrigerator and a wine cellar with capacity for 150 bottles from Liebherr.

The proposal presented by architect René Corredor (Sanicoc Internacional) is a project that was nominated for the 2016 Cemex Award, due to the impressive distribution of space and the wise selection of Smeg and Liebherr appliances.

This kitchen opens towards the living room and the dining room (through wood and glass panels) and displays a refrigerator and freezer from Liebherr, plus ovens and a dishwasher from Smeg, which fully comply with the requirements of the contest.

To complete the proposal, Corredor placed an island as the core of the concept. There, the use of an electric cooktop and a spacious work area that can be used as breakfast table stand out. In short, a kitchen with simple lines and discreet style where the luxury appliances are the cherry on top, fitting perfectly into the project.

The first edition of the Inspire&Design Contest was more than an attempt to gather the best ideas and proposals in kitchen design; the contest aimed at gathering incredible projects that could turn this event into the perfect platform for new and experienced professionals to showcase their creativity. Besides, the contestants had the opportunity to present innovative proposals to colleagues, the brands, the public, and develop trends in the industry. We, at LCI, wish to congratulate the winners and thank all those who enthusiastically participated as well.