China’s architectural renovation is an amazing thing. This ancient nation for which attachment to tradition is one of the most important cultural values has decided -it seems- to pay tribute to history while still looking to the future with arms wide open for what it brings.

Thus, it’s common to hear and see how the most amazing buildings at the moment are being built in their most important cities. The economic awakening of the greatest of the so-called “Asian tigers” has apparently become for the great architectural studios of the moment, a catwalk for their genius creations.

ZHA, Foster + Partners, Snøhetta, Herzog & de Meuron y Heatherwick Studio are just 5 of the architectural studios that have focused their eyes on China. The country is like a global experimental design and architecture laboratory. Green cities, buildings connected and skyscrapers that take your breath away due to their shapes are part of the constructions that are seen everywhere.

The reason for all this? The speed at which cities like Shanghai, Guangzhou or Beijing are growing and the exponential demand for the improvement of the standard of  living  of  their populated centers. Because, now even the humblest places are beginning to look like futuristic spaces that have left behind the concept of cheap copies, for which China used to be known.

Along with the ancient constructions that speak of emperors and the legends surrounding them, China has become a space full of iconic buildings that attract people to specific destinations. This is how you can speak of China as the main destination of “architourism.”

Since the 2008 Beijing Olympics, Beijing began to unravel a great architectural revolution thanks to the economic and political support, but most of all due to its technological development. In fact, many companies dedicated to fashion, technology, architecture, just to name a few, have seen in this Asian giant the perfect place to settle down and expand their horizons for the future.

On this subject, Kris Provoost, the Belgian photographer who is based Hong Kong, recently released a book entitled “China Embellished: The Architectural Revolution”. In the book, he makes a selection of the most exciting and iconic buildings that have been  erected in China in recent years in 15 cities ranging  from known metropolis (Beijing, Shanghai, Hong Kong) to less well-known places in the depths of the mainland country (Harbin, Changsha, and the now controversial Wuhan).

One statement that powerfully draws attention from the book published by Provoost is the reason behind the fact that most of the projects displayed in  his book are from Western architects. “Many are a storm of acronyms such as OMA, SOM, KPF and MVRDV. But  a lot of the projects are actually designed by Chinese architects who don’t get the credit they deserve,” he  says.

… and as a sample

As Kris Provoost says, in today’s China there is no place to turn to where there isn’t something that doesn’t stimulate the imagination. Theaters, colleges, stadiums  or urban design, everything talks about what’s to come and that fact that they are living ahead of time.

But let’s mention 5  examples of what we are talking about.

National Maritime Museum of China. This museum located  in the city of Tianjin, was designed by the Australian firm COX Architecture.  It  extends to the bay from a large waterfront park and is a three-story complex consisting of four wings, each dedicated to a different aquatic theme: the ancient ocean, the ocean today, voyage of discovery and the age of the dragon. In total, the building has six exhibition areas and 15 interconnected display rooms. 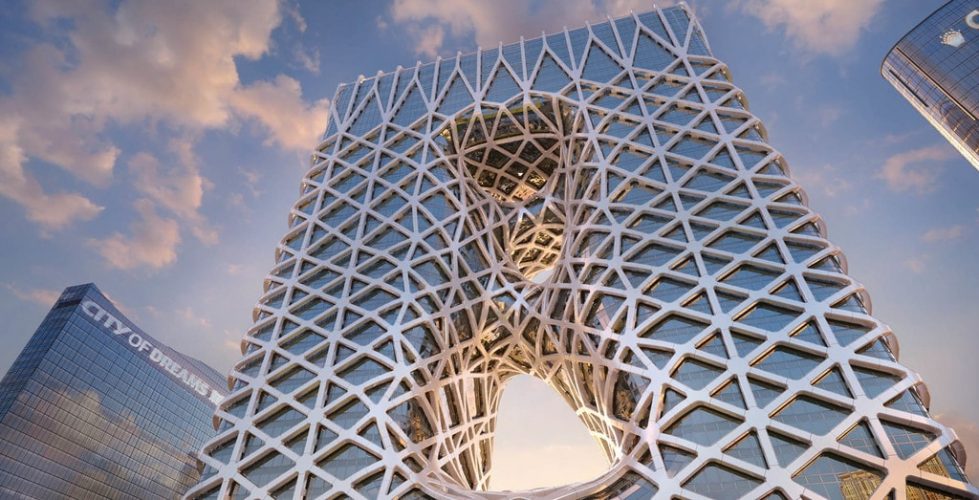 Hotel Morpheus. Three holes mark the twisted geometric facade of this breathtaking hotel that is the jewel of the crown  in Macau. Designed by Zaha Hadid Architects and inaugurated in June 2018, this is the world’s  first free-form high-rise exoskeleton. While Macau’s buildings are a reference for architectural style around the world, the  Morpheus is set to take the lead of the podium of what is known as the new architecture. But, not everything in it is design. The high-performance glazing minimizes solar gain, and the ridge of the exoskeleton provides shade. Instead of cooling the entire atrium, only areas used by staff and guests, such as lounges and restaurants, have localized air conditioning. And when it comes to the amenities, this hotel has 770 rooms, suites and villas, a rooftop spa and a swimming pool. 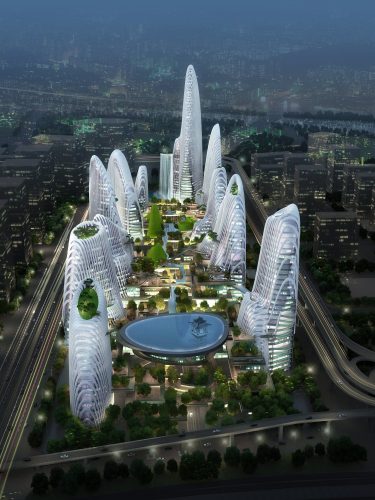 Nanjing Zendai Himalayas Center. The project presented at the 2014 Venice Architectural Biennale by MAD architects, finished the first stage of construction by the end of 2018. This urban proposal with the scale of a city has a total construction area of approximately 560,000 square meters. Located in Nanjing, capital of the oriental province of Jiangsu, China, it is formed by areas designated for commercial premises, hotels, offices and residential areas as well. The most striking thing about this center is certainly the mountain-shaped towers that seem to have been excavated by wind and water. Defined by white curved glass shutters that “flow” as waterfalls, they reflect the surrounding Nanjing mountain ranges and winding rivers. According to its design team, this development seeks to restore the spiritual harmony between humanity and nature through the integration of contemplative spaces. It is currently in the third and final phase of construction and the project is expected to be completed this year. 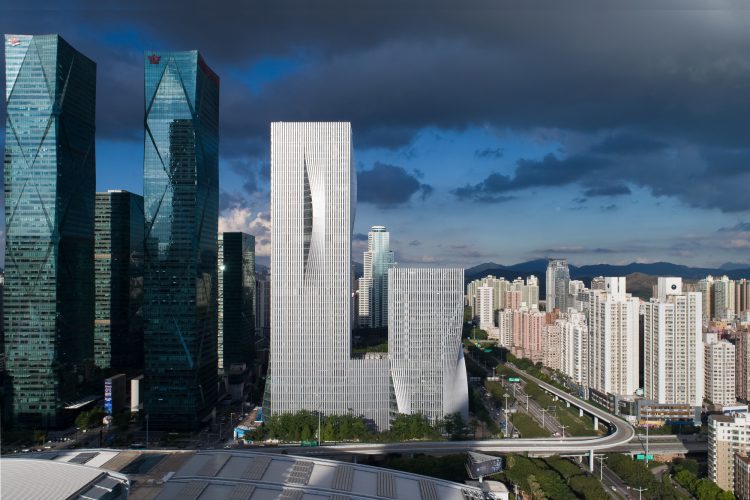 Shenzhen Energy HQ. This development created by BIG is located in the center of Shenzhen. It consists of two towers reaching a maximum of 220 and 120 meters respectively. These high-rise structures are connected to a 34-meters-high podium that houses the main halls, a conference center, a café and an exhibition space. The complex forms what is known as the ‘Shenzhen Energy Mansion’. And while it may look just like another skyscraper, the truth is that the 96,000 square meter office building is designed to look and feel like home in the cultural, political and commercial center of the city. However, the most important aspect is the skin that was developed to maximize sustainable performance and workplace comfort in China’s local subtropical climate. 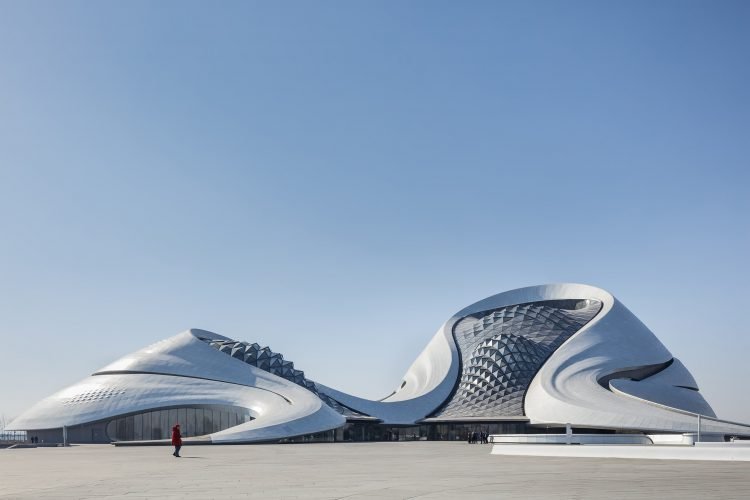 Harbin Opera House. It is the first and largest building that MAD has designed as part of Harbin Cultural Island, a major arts complex in China. This spectacular Opera House is designed to reflect the sinuous curves of the surrounding swampy landscape, through an exterior of plain panels of white aluminum and glass  that  contrasts with the roofs, which have a texturized surface shaped like glass pyramids inspired on ice that allow the entrance of light from above. The 79,000 square meters building has three floors distributed as  petals. They house a large theater with space for up to 1,600 people and a more intimate performance space for an audience of 400, which are presided by a wide hall.

These 5 jewels of the new Chinese architecture are just a small example of how much the country has changed and opened up to modernism through its shapes and technologies.