4 museums worth visiting just for their architecture 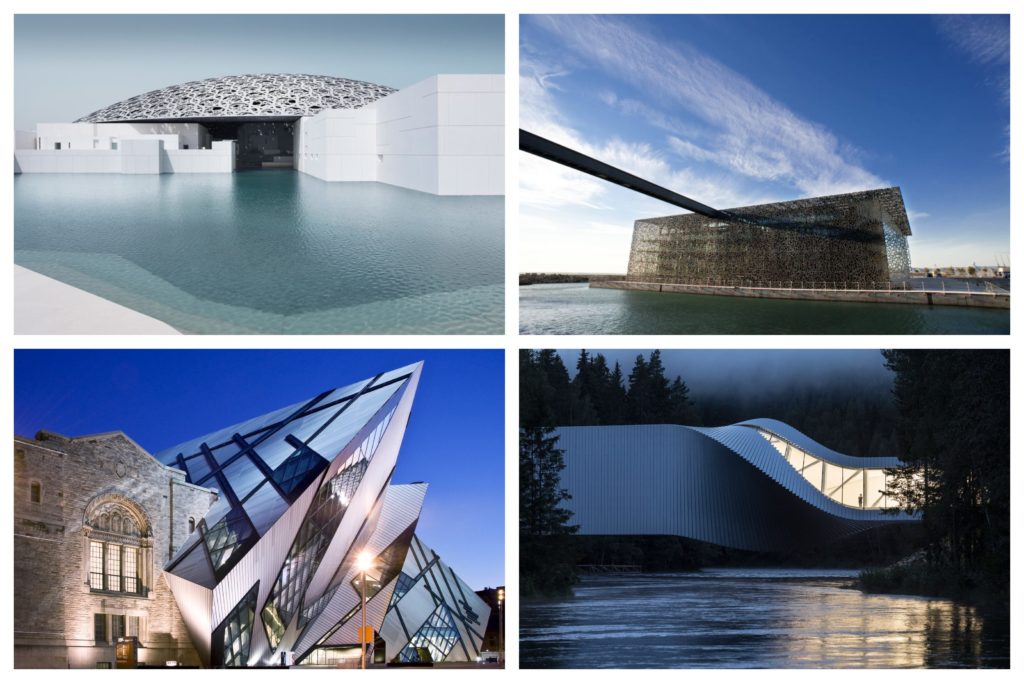 For some time now, architecture has been in charge of transforming the structures of museums into pieces of art as beautiful as what’s exhibited in them. This trend can be seen everywhere in the world.

And although we could talk endlessly to name and describe examples of these museums, we’ve decided to come up with a top 4 of the spaces created for art that are breathtaking both inside and outside.

The Top 4 of museum architecture

As they say in beauty pageants, we’ll mention the contestants in random order. However, we assure you that these are 4 of the most beautiful museum constructions today (and we say today, because architecture surprises every year).

1# The MUCEM of Marseille, France. Opened in 2013, the Museum of European and Mediterranean Civilizations (MUCEM) is the work of Italian architect Rudy Ricciotti in collaboration with Roland Carta. The horizontal structure of the museum doesn’t compete with the silhouette of the Fort Saint-Jean, one of the great attractions of Marseille, which serves as an anteroom, because it has a pedestrian access.

A detail that certainly grabs attention about the MUCEM is its facade: a coating of fiberglass concrete lattices, which resembles the shapes of the surrounding Mediterranean, cuts the wind, and allows the scent of the sea to come in, which certainly creates a very special environment inside. Located in the old port of Marseille, the structure measures 72 meters per side and houses a permanent exhibition dedicated to the history of European cultures on its main floor, while the second floor is dedicated to temporary exhibitions. This museum is as beautiful by day as it’s at night.

2# The ROM in Ontario, Canada. In this museum the past and the future merge, both on its facade and inside. Founded in 1912, it was part of the university until 1968, and today both the museum and the university work together on many projects.

The ROM is Canada’s largest museum of world culture and natural history and is the fifth largest in North America. It has six million elements and more than 40 galleries. The highlight of this museum is the fact that it houses the world’s largest collection of Burgess shale fossils (more than 150,000 specimens).

Due to the growth of the collection, the Royal Ontario Museum has been expanded three times. The first time in 1933, the second in 1978 and the third in 2007. The latter, made by the architect Daniel Libeskind, gave the museum a very particular shape that turned it into a masterpiece.

The 4 hidden pillars where the 8-layer dome is supported (four exterior layers coated in stainless-steel and four aluminum-coated interior layers) give the illusion of floating, just as if you were entering one of those magical places described in The Thousand and One Nights. The dome itself is a marvel of geometric design. It  allows light to penetrate and create a cinematic effect of “rain of light” that changes as the sun progresses throughout the day.

Inspired by the medina and low-rise Arab settlements, the Louvre of Abu Dhabi consists of a total of 55 individual buildings connected by 26 galleries. These galleries tell a chronological story about human creativity. They explore the common ideas and problems that have defined humanity from prehistory to the present day. The museum includes close to 600 masterpieces and regularly exhibits world-class pieces as loans from its international partners, which means that it always has something new for visitors to discover.

4# The Twist Museum, Jevnaker, Norway. According to its authors, the architects of Bjarke Ingels Group (BIG), this is a hybrid-structure museum. Crossing the winding Randselva River, The Twist is a habitable bridge torqued at its center.

Thanks to the museum, visitors to the Kistefos Sculpture Park in Norway, can go from one bank of the Randselva River to another and enjoy the beautiful sculptures that the museum has integrated with the surrounding nature.

Besides, The Twist is a museum that connects two different spaces: an introverted vertical gallery and an extraverted horizontal gallery with panoramic views of the river. The building of more than 60 meters seems to challenge all paradigms in terms of architecture and engineering.

Composed of 40-cm-wide straight aluminum panels, the museum’s double-curved geometry is shaped like a fan. This same principle repeats inside the structure, but with 8-cm-wide white fir slats covering the floors, walls, and ceilings. From any direction, visitors experience the entrance into a twisting gallery, and many say they felt as if they were walking through a camera shutter.

This impressive building, which received its first piece in 1948, included in May 2019, in its outdoor sculpture park, the installation entitled Shine of Life by Yayoi Kusama, one of the most avant-garde artists in the world, famous for the use of polka dots.

So, if you’re passionate about architecture and art, add these 4 museums to your TO DO LIST. We’re sure you’ll enjoy them.